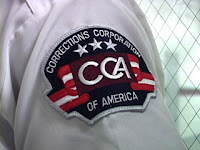 Arizona is second only to California in the number of corporate charter schools and first in per capita enrollment.  Now with help from the private prison industry lawyers and lobbyists in passing Arizona's "show me your papers" law,  the state is vying to become #1 in corporate prison population. No, this is not a joke.

A brief clip from an in-depth investigative piece from NPR:

. . . . The law is being challenged in the courts. But if it's upheld, it requires police to lock up anyone they stop who cannot show proof they entered the country legally.

When it was passed in April, it ignited a fire storm. Protesters chanted about racial profiling. Businesses threatened to boycott the state.

But while the debate raged, few people were aware of how the law came about.

NPR spent the past several months analyzing hundreds of pages of campaign finance reports, lobbying documents and corporate records. What they show is a quiet, behind-the-scenes effort to help draft and pass Arizona Senate Bill 1070 by an industry that stands to benefit from it: the private prison industry. . . .