In the looming shadow of a Chicago scandal that is in the process of sinking any minor mayoral hopes of Gerry Chico in Chicago, the Billionaire Boys' Club (BBC) brought Arne Duncan and some Second City comics to Denver for a big feel-good feed for school board members, school administrators, and teachers from around the country.  While reiterating the U. S. Chamber's corporate education reform plan, Duncan urged school boards, administrators, and teachers to put their differences aside for the sake of test scores and to agree to advance the corporate reform agenda.  No questions, please.

In a garish and cynical ploy not-so-clerverly disguised as a concession to teachers, the BBC's real goal for the Denver conference was to introduce new mandates for the same kind of evaluation by test score results for school administrators and even school boards (at least until school boards can be eliminated).

Are teachers really supposed to feel better about being unethically evaluated based on invalid and unreliable testing methodologies if their bosses are treated the same??

Stacy Khadaroo at the Christian Science Monitor, who is obviously trying take on the role that Ben Feller played for Margaret Spellings, has this:


Secretary Duncan called on them to take on tough issues such as teacher benefits, layoff policies, and the need for more evaluations of administrators and school boards, not just teachers. “The truth is that educators and management cannot negotiate their way to higher [student] performance. The [labor] contract is just a framework. Working together is the path to success,” he said in opening remarks Tuesday.

All of these kumbaya moments were unfolding just as the other wing of the Corporate Socialist Party, the Republicans, were initiating a state by state blitzkrieg beginning in Wisconsin to make the possibility of labor negotiations a thing of the past.  So with the democratic right of workers to organize and bargain at stake, the Democratic Secretary of Education is meeting with educators from around the nation to downplay the need for bargaining.  Does this make anyone else feel a little creepy?

Of course, if teachers and school boards stop bickering and get all the kids test scores up and into college--the poor ones in the online diploma mills and the rest in brick and mortar colleges--then, hey, we can all be or pretend to be management, even though most will be underemployed or unemployed like the Ants in China and India.  Crazy talk, right?  And the untouchables poor people, well, someone has to pick up and/or eat the garbage.

But don't worry, AFT and NEA.  Arne is on it--he said day before yesterday that he was going to call Gov. Scott "Hosni" Walker in Wisconsin.  What was he going to say?  We don't know what he said because he wouldn't say, but the promise to call is apparently enough to calm the nerves of AFT and NEA leaders, while protecting their "place at the table."


DENVER--U.S. Education Secretary Arne Duncan says that the move in Wisconsin and other states to strip teachers of bargaining rights worries him.

Duncan said Wednesday at a Denver conference of teacher unions and school administrators that he'd make a personal call Thursday to Wisconsin Gov. Scott Walker. Duncan didn't elaborate on what he'd tell the GOP governor, but he promised the educators that he'd put pressure on governors to work with unions, not antagonize them.

The head of the American Federation of Teachers, which represents about 1.5 million members nationwide, praised Duncan's vow to stick up for teachers' unions. 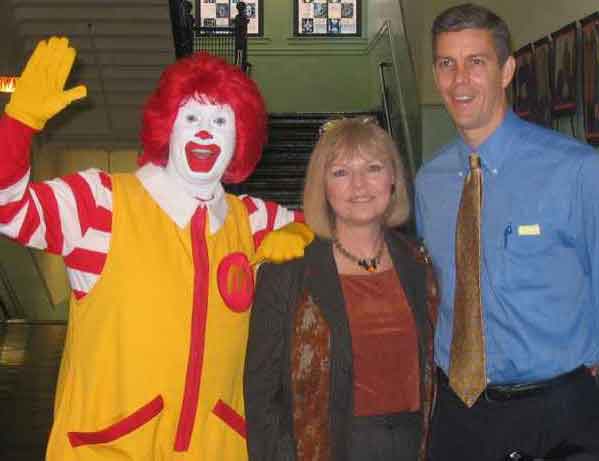 All praise! Arne Duncan for his post-partisan pandering--at least until his involvement in the former fraudulent enterprise, SALF, hits the New York Times--or the Christian Science Monitor.  How likely is that!


The collapse of the foundation was politically uncomfortable for a number of major figures in Illinois, from President Barack Obama to now-Education Secretary Arne Duncan, who were connected to it in some way.