Sharon Otterman for the Times has another nail today for the Bloomberg/Black edu-coffin.  The first graph has this:


The new statistics, part of a push to realign state standards with college performance, show that only 23 percent of students in New York City graduated ready for college or careers in 2009, not counting special-education students. That is well under half the current graduation rate of 64 percent, a number often promoted by Mayor Michael R. Bloomberg as evidence that his education policies are working.

And buried in the story is this detail that sent me to the State pdf. file to have a closer look:


The data also cast new doubt on the ability of charter schools to outperform their traditional school peers. Statewide, only 10 percent of students at charters graduated in 2009 at college-ready standards, though 49 percent received diplomas. The state has not yet calculated results for every district and school.

So as Cathie thrashes around the City getting booed for blowing up a fresh supply of 12 community public schools for the benefit of corporate-run charters, one must wonder, as Sarah Palin says, WTF??

Here's the dope.  Note that the State somehow could not figure a way to keep the charter data on the same page with the other school data.  Click each chart if you need to enlarge: 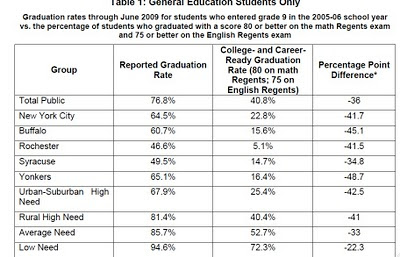 We must congratulate Meryl Tisch and the corporate foundations running the State education enterprise for coming up with a novel term for the "poor."  The new preferred term by the oligarchs: "high need."  And the "low need?"  Not to worry--they already have it all.
at 11:10 AM