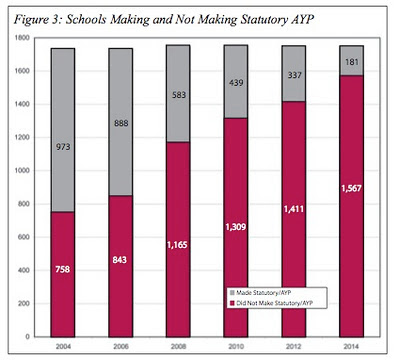 There is a zero percent chance that we will ever reach a 100 percent target.  --Dr. Robert Linn, former President of the American Education Research Association

The quote above is from the Washington Post in 2007, and the chart above that is from a Massachusetts study in 2005 (mass_partnersAYP.p65).  But as we now know, the enemies of public education had this information when they stitched together the NCLB monster in 2001, as did friendlier though more delusional Dems like Kennedy, who was still as much in denial in 2007 as his brother, Bobby, was in the 1960s when promoting something new called "school accountability" as a way to achieve equality in schooling.  That school of wishful thinking is now continued by the neoliberals at Education Trust, who spend their time poring over test results and bad-mouthing teachers for not solving the achievement deficits that poverty and vast income disparities have created and continue to exacerbate, notwithstanding idiot statements reminiscent of this one by Kennedy in 2007:


"The idea of 100 percent is, in any legislation, not achievable," said Sen. Edward M. Kennedy (D-Mass.), chairman of the Senate education committee. "There isn't a member of Congress or a parent or a student that doesn't understand that."

Kennedy added that the law's universal proficiency standard served to inspire students and teachers. But "it's too early in the process to predict whether we'll consider changes" to the 2014 deadline, he said.

Well, we are still 2+ years away from educational armageddon, and the schools where there are large concentrations of poor kids already have been entirely demoralized or demolished, blown up or are in the process of being turned into segregated KIPP-like chain gangs operated by profiteers or tax scofflaws.  (Is it a coincidence that the largest charter school operator in the U. S. is the most corrupt as well?)

What Michael Winerip's most recent piece in the NYTimes shows is that manufactured failure is not just for the poor anymore: the same kind of intellectual austerity movement has come to the leafy suburbs of New Hampshire.  What Winerip's moving piece points out clearly is that it way past time either to take back our schools and create corporate-free learning zones, or to SHUT THEM DOWN. PERIOD.

DURHAM, N.H. — Every spring, Linda Rief, who is in her 25th year of teaching English at Oyster River Middle School, has eighth graders do a semester-long “genre” project. They pick a subject area like mysteries, read masters like Agatha Christie, study the writer’s craftsmanship (“Explain how the author foreshadows doom”), then draft their own.

They have had time for these things at Oyster River. Students here do so well on state standardized tests — about 85 percent of them rate proficient — that there has been little need for test preparation. Ms. Rief said she did 45 minutes — a year.

“The attitude was, if we did good teaching and we were passionate and energetic, kids would learn and that would be enough,” said Ms. Rief, who is 67.

No more. Last year, the No Child Left Behind law, which calls for 100 percent proficiency by 2014, caught up with Oyster River. Under the law’s mandates for adequate yearly progress toward that goal, the school was one of 326 public schools in New Hampshire — 69 percent of the total — deemed to be failing.. . . .

. . . .
The intent of No Child Left Behind was to provide quality education for poor children, mainly in urban areas, but it has taken over everything. By next spring, 90 percent of New Hampshire schools are expected to be labeled as failing.

That may sound 100 percent ludicrous, but it has transformed the academic culture, even in prosperous towns that have long been immune, like Durham, where the University of New Hampshire is located.. . . .
. . . .Even the new focus on test prep here pales compared with what happens in places like New York City and Florida, but the change has been felt in a school system where teachers have long been trusted and given autonomy.

“Suddenly at staff meetings we’re talking about brain games,” Ms. Rief said. “We’re talking about healthy brain food. The week before, we’re not giving homework so everyone gets more sleep and rests their brains.”

There are posters to remind students of the 12 essential test prep words and posters to raise their Score: Strategies, Complete, Organize, Read, Energize. The test is the New England Common Assessment Program, and some fifth-grade boys are now calling themselves the Necap Ninjas.

While Mr. Richard has urged Ms. Rief to do more test preparation, he has not forced her. “I bug her about this,” he said. “But I trust Linda to do what’s best.”

Ms. Rief said she was sticking to the annual 45 minutes.

Mr. Richard says no one in town has asked him why his school is failing. “Of course not,” he said. “People get it.


They do want to know why, if Oyster River is failing, its eighth graders do so well when they get to high school.

This year, Oyster River students averaged 1,670 on the three SAT tests, 111 points above the state average and 170 above the national average.

A failing school must form a committee to develop an improvement plan. Over the summer, Mr. Richard met with 10 of his teachers several times. Among the topics discussed were the little things that add up to a better score. “We realized our students weren’t looking at the titles on the reading passages,” he said. “The title tells you what the story is about; it’s really important.”

They studied past tests. “Several questions were related to the use of textbooks, and we’re a textbook-free school,” he said, explaining that his teachers’ original lessons are superior to the packaged curriculums. “No wonder they had so much trouble.”

While the school improvement committee was meeting, Ms. Rief and two other teachers attended workshops given by Navy engineers from the Portsmouth Naval Shipyard. They learned how to build a robotic underwater vessel and will spend two weeks teaching students to build their own.

Ms. Rief worries that a new generation of teachers has been raised on standardized testing and thinks that is the norm. Ms. Rief fears that public schools where teachers are trusted to make learning fun are on the way out. Ms. Rief understands that packaged curriculums and standardized assessments offer schools an economy of scale that she and her kind cannot compete with.