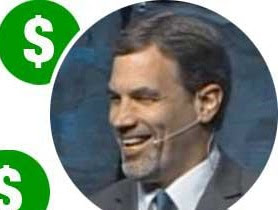 Look up the word charlatan in any lexicon and it would be of no surprise if it features a photograph of Tom Vander Ark as the accompanying illustration. The former Bill and Melinda Gates Foundation executive has been a major player in the corporate education reform onslaught against the public commons. He has been gorging himself at the tax trough for some time now. His antics and blather have garnered quite a bit of ink here at Schools Matter, partly since few people are as adept at technobabble and doublespeak as Vander Ark.

Earlier this evening Class Size Matters and Parents Across America's Leonie Haimson posted an intriguing tweet from which I shamelessly lifted for the title of this post:


Cranky is an understatement, Vander Ark's childish rant against the National Education Policy Center (NEPC) had all the class and irrational ignorance of a petulant charter school student ignominiously dumped back to public school right before the CAHSEE. He's incredulous that anyone would question the unmitigated greed of these online swindlers (himself included). I left the following comments:

You're embarrassing yourself Mr. Vander Ark. National Education Policy Center at University of Colorado at Boulder School of Education is one of the most respected sources on education around. Its staff, including the celebrated Dr. Welner, are some of the most knowledgeable experts on education policy in the nation. What are your qualifications again? A businessman and former Gates Foundation executive?


The report that flimflamer Vander Ark is whining about? Online K-12 Schooling in the U.S.: Uncertain Private Ventures in Need of Pubic Regulation by the NEPC's Gene V. Glass and Kevin G. Welner. God forbid that respected academics suggest that an entirely unregulated industry sucking up public tax money faster than a shop vacuum be subject to a modicum of oversight. We're talking about one of Vander Ark's biggest cash cows after all!

UPDATE: It appears Mr. Vander Ark deleted my original comments. Seems he can't stand for anyone speaking truth to his power and privilege.
at 1:21 AM