The Milton Friedman disciples who came to Washington with the Gipper in 1980 were intent upon smashing the public school system, beginning with the newly-formed U. S. Department of Education.  Reagan's boys fell short on both counts, but they set in motion for the next 30 years a system of educational auditing that would assure public education coming up short in measurements designed by greed merchants and tax evaders from the Business Roundtable who wanted then and want now to turn education into a primary corporate revenue stream.  A major piece of that strategy for assured public education failure was to renorm the National Assessment of Education Progress so that almost all public schools would fall short of "proficiency."

Analyses over the years have shown, in fact, that the NAEP proficiency scales are so high that the vast majority of our high-flying international competitors, too, would fall short of proficiency if they were to be subjected to the NAEP:


The definition of "proficient," of course, comes from the NAEP achievement levels whose only function is that of a political bludgeon. As Gary Phillips of the American Institutes for Research has shown, though, if students in other nations sat for the NAEP reading test, no country would have a majority of its students proficient in reading. The top-scoring country, Sweden, would only place about one third of its students in the proficient category (In the 2007 assessment, the U. S. had 33% of 4th graders and 31% of 8th graders scoring proficient or better). Only six countries would have a majority of students proficient in math (and not by much) and only two could claim this august status in science (http://www.air.org/expertise/index/?fa=viewContent&content_id=617).

When NCLB became law in 2002, however, NAEP moved to the background as more pressing AYP requirements moved front and center.  Even so, NCLB fit the corporate education "reform" agenda for the past thirty years that have been characterized by increasingly-draconian testing and sanctioning measures that serve to 1) undermine public schools and to replace them with private school vouchers and corporate charter schools, 2) return the teaching of the poor to 18th Century methods based on memorization and recitation, 3) find cheap and profitable ways to contain, segregate, culturally neuter, and behaviorally modify the urban poor, 4)  promote the total compliance test prep KIPP chain gangs for the poor in order to preserve the pretense that poverty is not a factor in the test score gaps, and, 5) devise technological schemes that offer marginal distant learning alternatives to the poor in both rural and urban America.


Now with new NAEP scores released, attention has returned to what the Nation's Report Card can tell us that is any different from what it has told us since 2005: NCLB/corporate education reform is not working.  As with previous NAEP scores, this time it's a hard spin for the corporate education reformers, as they press their central lie that high stakes testing has improved learning while claiming that schools are still doing a pitiful job.

Notice in the charts below how improvements on NAEP have slowed since 2003, when NCLB went into effect. In 4th and 8th grade math, 6-point gains since 2003: 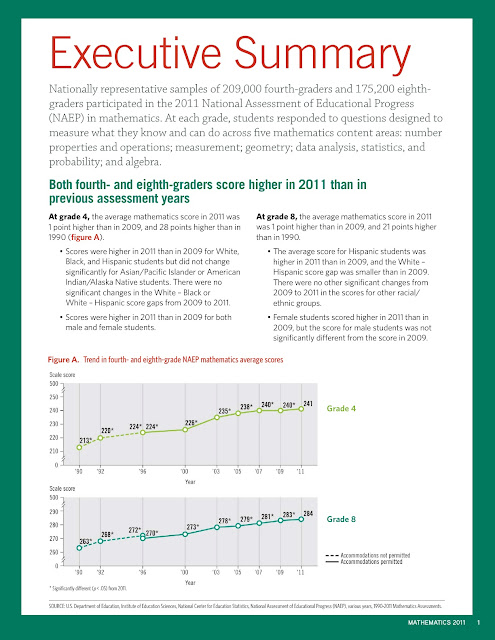 And Arne's response?  Did he come out and admit that corporate education reform has left another generation of children much less prepared than they could have without the billions spent to ramp up the education-testing complex? Not so much:

“The modest increases in NAEP scores are reason for concern as much as optimism,” said Education Secretary Arne Duncan in a statement. “It’s clear that achievement is not accelerating fast enough for our nation’s children to compete in the knowledge economy of the 21st Century.”

So what is the source of Arne's optimism?  Could Duncan be referring to the fact that NAEP scores didn't go down!

And what about the test score gaps?


The NAEP scores also highlight achievement gaps for minority and low-income students, which have been slow to narrow.

There was no change in the black-white achievement gap in either reading or math between 2009 and 2011, although there was a small improvement in the Hispanic-white gap for both eighth-grade reading (where the 22-point gap was two points smaller than in 2009) and eighth-grade math (where the gap narrowed three points, to 23).

It is time for parents, students, and teachers to do what Oakland is doing tomorrow: Declare a city-wide general strike and occupy our schools until they become corporate-free zones.  It's time for the corporations to be assessed, not the children and the teachers.