Through FOIA, In the Public Interest has acquired hundreds of documents that provide the much-needed links between corporate interests and state and federal education policy makers.  Below is a commentary from IPI and below that are some page views that offer some graphic evidence of the depth of the sewer, which promises to give corruption in education policy entirely new boundaries.

What we find, essentially, is that Bush's Foundation for Excellence in Education is the conduit that carries money, communication, lobbying, and logistics for making education policy at the state and federal levels.  Working in conjunction with ALEC to write legislation, this is how policy gets done without public oversight and without elected officials ever getting involved.

What I clipped from the huge stash is enough to give readers an overview of how Jeb Bush's Foundation for Excellence in Education has come to dominate the education agendas in a number of states with its "Chiefs for Change." Below is a list of the Chiefs.

Emails between the Foundation for Excellence in Education (FEE), founded and chaired by former Florida Gov. Jeb Bush, and conservative state education officials show that the foundation is writing state education laws and regulations in ways that could benefit its corporate funders.

The emails, obtained through public records requests, reveal that the organization, sometimes working through its Chiefs For Change affiliate, wrote and edited laws, regulations and executive orders, often in ways that improved profit opportunities for the organization’s financial backers. Bush has been referred to as the “godfather” of Chiefs for Change, an alliance of conservative state superintendents and education department directors with significant authority over purchasing and policy in their states.

Education has the potential to be an enormous business opportunity and corporate America is looking for a way in. In 2010 Rupert Murdoch, who now has a growing education division called Amplify, said recently that "[w]hen it comes to K through 12 education, we see a $500 billion sector in the U.S.” Amplify is one of FEE’s corporate donors.

The Portland Press-Herald has reported, the emails were evidence of “a partnership formed between Maine’s top education official and a foundation entangled with the very companies that stand to make millions of dollars from the policies it advocates.”

The emails paint a cozy picture of influence and, in some cases, actually outsourced policy making that could significantly expand markets for a new generation of for-profit education companies. Rick Ogston, the founder of for-profit online education company E2020, told Reuters last year that they go to FEE and say “these policies are in the way, and it would be great if you could change them.”

In New Mexico, FEE acted as a broker to organize one-on-one meetings between their corporate donors and individual Chiefs. A draft agenda for the Excellence in Action 2011 Summit blocked off two hours for “Chiefs for Change donor meetings” Another draft agenda for the meeting allocated nearly three hours to “Chiefs for Change donor meetings” The donors for the summit included The Walton Family Foundation, Bradley Foundation, GlobalScholar, Target, Houghton Mifflin Harcourt, Microsoft, State Farm, IQity, McGraw-Hill Education,, Intel, Pearson Foundation, Apex Learning, ETS, Electronic Arts, Koret Foundation, SMART Technologies, K12, Charter Schools USA, and Connections Academy. Demand for donor time was so high that Patricia Levesque wrote that she had to turn down opportunities for the chiefs to meet other representatives from companies.

The Foundation for Educational Excellence also acted as a conduit for ALEC model legislation and policies. LePage’s order originated at ALEC, was tailored for Maine by the FEE and sent to Education Commissioner Stephen Bowen, who subsequently forwarded it to LePage to release unchanged. “Resolution adopting the 10 Elements of High Quality Digital Learning” is a model bill introduced by Arizona Sen. Rich Crandall at the 2011 ALEC Annual Conference. LePage’s executive order originated with the Digital Learning Council, a group co-chaired by Bush and funded by FEE donors K12 Inc, the Pearson Foundation, and McGraw-Hill

In Florida, FEE helped write legislation that would increase the use of the FCAT, a proprietary test currently under contract to global publishing giant Pearson, an FEE donor.
In February 2012, FEE CEO Patricia Levesque urged state officials to introduce SendHub, a communications tool, into their state's schools. News reports indicate that Jeb Bush was an investor in the start-up by the fall of 2012. Levesque’s income actually comes from her lobbying firm, Meridian Strategies, not FEE. Meridian has several clients that are also FEE donors including I-quity, an online education company and The College Board testing company.

“These emails show a troubling link between Jeb Bush's effort to lobby for ‘reforms’ through his statewide Foundation for Florida's Future, his national Foundation for Excellence in Education, and the powerful corporations who want access to billions of our tax dollars by reshaping public education policies just to create markets for themselves - none of which is in the best interest of our children,” said Kathleen Oropeza, a Florida parent.

The first document below shows just one agenda for one of the regularly-scheduled conference call that included the Chiefs.  Note the upcoming meetings, where Chiefs were wined and dined by corporate insiders, salesmen, and other bottom feeders with enough cash to get a meeting (click to enlarge) 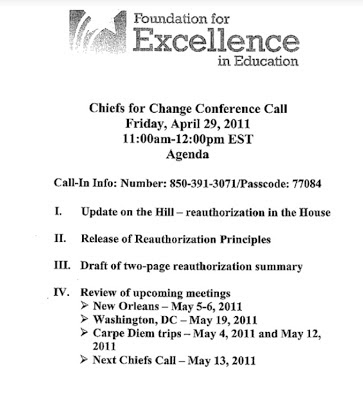 Below is a sample email showing dinners being arranged by Eli Brod during one of the many coferences arranged by Bush's FEE. (Click to enlarge) 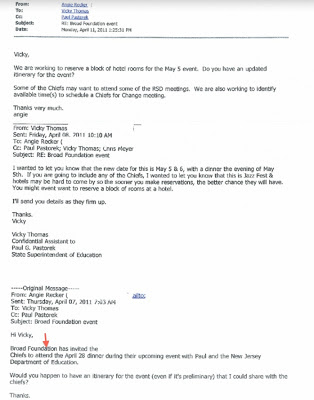 Below is the "great opportunity for Chiefs" email (click it to enlarge): 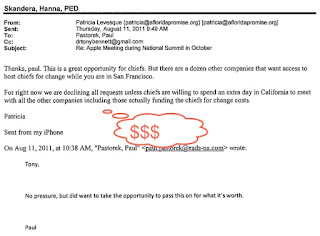 Below is a copy of a thank you note from Jeb to the Louisiana Chief, Paul Pastorek. 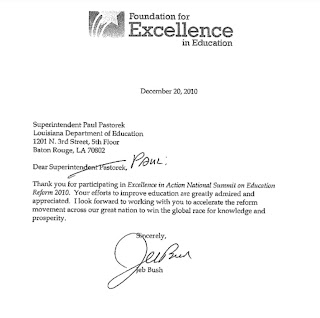 And below is the check to cover some expenses. 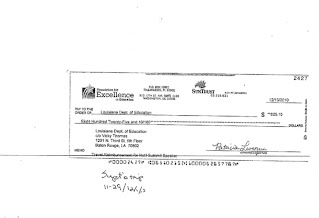