Robert D. Skeels: a community candidate for LAUSD School Board

"Alongside this began a sharp rise in the costs of elections, which drove the political parties even deeper into the pockets of the corporate sector." — Professor Noam Chomsky 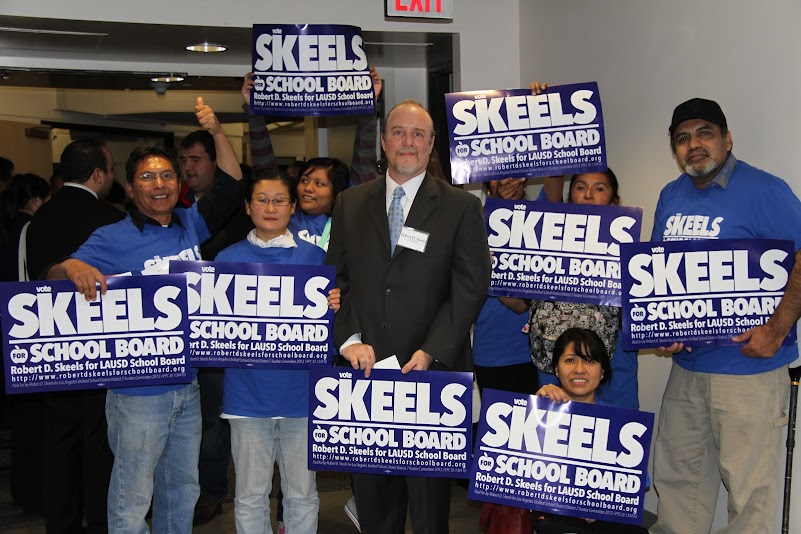 Readers have probably already seen the news of how the morning after I trounced the incumbent at a local candidate forum, that NYC Mayor Bloomberg increased my opponent's already obscene campaign fund by a whopping $1 Million. We had begun our campaign early, because we knew that the corporate reformers would "up the ante" this election cycle, but I don't think anyone anticipated the right-wing Coalition for School Reform (CSR) would raise over $2.5 Million in support of the corporate candidates for the March 5, 2013 election. This is significantly more than they raised last election cycle.

The intractable Los Angeles Times asked me for a quotation on the latest plutocrat donation to the corporate CSR slush fund. As their custom, they only used an out-of-context sentence fragment from my quote. Professor Diane Ravitch, on the other hand, used my full quote along with an introduction:

Robert Skeels is a pro-public school candidate in Los Angeles. He has raised $15,000. He will not get anything from Eli Broad or Michael Bloomberg.

The LA Times asked me for a quote on Bloomberg's $1 Million CSR donation. Here's my response: "As a community candidate who has raised over $15,000 through myriad small contributions from local parents, community members, and classroom teachers, I find it dismaying that a single out-of-state billionaire has a greater voice in our school board election than all the working families of District 2. Where were these millions of dollars when the incumbent callously cut early childhood education, adult education, and K-12 arts last year?"

I'm not expecting to out-fund-raise the billionaire boys club, but every donation counts. If you believe in public education, and have followed my work on schoolsmatter.info and other sites, then you know what I stand for. If you're in Los Angeles, we can use your physical help with precinct walking, phone banking, and letters to the editor. If you aren't in town, consider a donation. We're a few weeks out, and the last minute help can make all the difference.

Award-winning documentary film-maker Chris Hume captured footage and interviews from the Robert D. Skeels for LAUSD School Board campaign's third weekend of precinct walking on January 19, 2013. Filmed on 1st Street in Boyle Heights at Purgatory Pizza just prior to the group going out to talk to voters. Featured in the video are two widely respected educators whose support is greatly appreciated.

Here is the text of our latest campaign flyer:

Trusted by Community, Rooted in Community

Robert D. Skeels' longstanding as a principled community activist has won him broad support with families, community leaders, and grassroots organizations. LA Schools Report recently wrote about him: "just one School Board candidate [is] running a truly grassroots campaign built on dozens of volunteers and more than a hundred small contributions of as little as $5 — and little else by way of outside support." Robert's record of defending schools like Garfield HS from outside takeover, siding with public school parents against colocations, advocating for the rights of special needs students, and standing up against the incumbent's cuts to early childhood education, elementary arts, and adult education has demonstrated that he will aways fight for the community and stand up against corporate interests.

Trusted by Education Experts, Rooted in What Works

Supporting Programs that Serve Our Community

The current LAUSD leadership has a long history of squandering our community's money as evidenced by massive spending on useless assessments, expensive consultants, highly discredited value added methodologies, and nine figure real estate giveaways to lucrative charter corporations. Instead of looking to cut the former expenses, LAUSD leaders have targeted programs that our communities depend upon most — Early Education, Student Readiness and Language Development Program (SRLDP), Elementary Arts, and Adult Education. The Superintendent and LAUSD Board of Education President have continually balanced the budget on the backs of the working people. Robert D. Skeels has been on the forefront of every struggle to fight budget cuts and to save programs critical to our community.

Public education activist, researcher, and writer Robert D. Skeels has lived, worked, and organized in District 2 for over 18 years. He and his wife, Yoon Jung Lee, make their home in Historic Filipinotown. Robert is a U.S. Navy Veteran. He attended Glendale Community College and the University of California at Los Angeles (UCLA). Robert taught Catechism at St. Teresa of Avila Church for 12 years. For the past 15 years he has volunteered ten hours a week teaching life and literacy skills at the Mary Lind Foundation. Robert is a committed member of a number of grassroots education and immigrant rights organizations including Coalition for Educational Justice, Public Education and Social Justice Advocacy, The Trinational Coalition To Defend Public Education, The Southern California Immigration Coalition, and Veterans for Peace. Robert's articles and essays have appeared in publications including: Schools Matter, CounterPunch, Dissident Voice, Daily Censored, Echo Park Patch, and The Los Angeles Daily News.

RT @rdsathene Supporter sent this perfect juxtaposition of the 1%'s Mayor with a 99% #LAUSD School Board Candidate! twitter.com/rdsathene/stat…