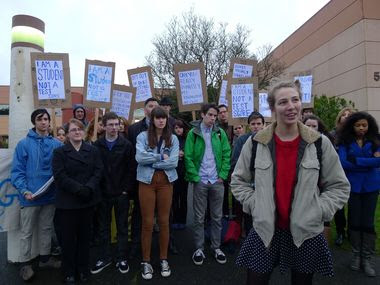 About 30 students gathered outside the Portland Public Schools district office to kick off a campaign urging students to opt out of state standardized tests.
A group of students from the Portland Student Union and the Portland Public Schools Student Union are asking students to boycott the annual Oregon Assessment of Knowledge and Skills exams, which are required by state law.
The students are calling the tests unfair measures of teacher and student performance, as well as a waste of resources, echoing a longtime but still rancorous debate over the place of standardized testing in school systems.
Those disagreements have recently ratcheted up after teachers in Seattle refused to administer a district-mandated test meant to evaluate student progress. That particular test is separate from Washington's state standardized tests.
Oregon's OAKS tests are required by state law, but students are allowed exemptions when parents cite religious or disability-related reasons. Portland schools officials said they knew of no parents who opted out last year, and only four had done so the year before.
Outside of the district office on Monday, Cleveland High School junior Bria Justus said she felt that state test scores shouldn't be able to label people or schools as "In Need of Improvement." The OAKS tests help inform school and district ratings, and can even lower a school's rating to the bottom rung if they don't get enough students to participate in state tests.
"I don't think that one test should justify what happens in the classroom, and what I'm learning and what I can comprehend," said Justus.
Deja Brooks, a Wilson High School junior, said she felt the emphasis on the test was taking away from class time. Instead of focusing on important papers in her English class, she said, they would have to take the state writing test or do a writing sample in preparation for the tests.
Both said they plan to opt out of at least one test this year. For high schoolers, the test is administered during junior year.
The tests have recently taken on more importance for students, as passing certain subjects has become a graduation requirement. If a student doesn't take or pass the test, they can still use some alternative assessment, such as SAT or ACT scores, or a locally-graded work sample.
The students organizing the boycott have encouraged using those alternative assessments, but some educators have worried that struggling students who haven't done well on those standardized tests may be put at a disadvantage. Portland offers the ACT exam to all students for free, and Lincoln High School senior Alexia Garcia says they are hoping to start a fund to help students take those alternative assessments if they cannot afford the fees.
Portland schools spokesman Matt Shelby admits officials can't force a student to take a test, but says the state tests are a district and state requirement.
"We have a responsibility to proctor the test, we have a responsibility to require the test and we're going to go continue to do so," he said.
-- Nicole Dungca
at 8:42 AM

Email ThisBlogThis!Share to TwitterShare to FacebookShare to Pinterest
Labels: opt out, student protests