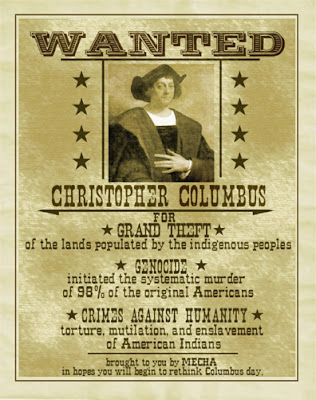 “They do not bear arms, and do not know them, for I showed them a sword; they took it by the edge and cut themselves out of ignorance. They have no iron. Their spears are made of cane… They would make fine servants… With fifty men we could subjugate them all and make them do whatever we want” (Zinn, Howard. A People’s History of the United States, 1492 – Present).

During Columbus’ second expedition, Columbus wrote: “Let us in the name of the Holy Trinity go on sending all the slaves that can be sold.”

“But too many slaves died in captivity. And so Columbus, desperate to pay back dividends to those who had invested, had to make good his promise to fill ships with gold. In the province of Cicao on Haiti, where he and his men imagined huge gold fields to exist, they ordered all persons fourteen years or older to collect a certain quantity of gold every three months. When they brought it, they were given copper tokens to hang around their necks. Indians found without a copper token had their hands cut off and bled to death… In two years, through murder, mutilation or suicide, half of the 250,000 Indians on Haiti were dead” (Zinn).

“When we read the history books given to children in the United States, it all starts with heroic adventure—there is no bloodshed—and Columbus Day is a celebration… One can lie outright about the past. Or one can omit facts which might lead to unacceptable conclusions… To emphasize the heroism of Columbus and his successors as navigators and discoverers, and to deemphasize their genocide, is not a technical necessity but an ideological choice. It serves—unwittingly—to justify what was done” (Zinn).
Today’s “Free Market” principles, supported by neo-conservatism or neo-liberalism and perpetuated by a “corporatists’ crusade,” are align with the policies of the “Chicago School” ideologues, the World Trade Organization and the International Monetary Fund. These doctrines perpetrate a blitzkrieg deconstruction of the middle class, privatization of public ownership and industry (downsizing and parceling out public companies and services to private interests), government deregulation and cuts to spending (thus, stimulating deep economic recessions) and cutbacks or the elimination of the public sphere and its pension systems and all social funding – hence, turning the working class into the “disposable poor” – to loosen control of the flow of money and to produce “freer trade” in the global market marked by an intransigent belief that “it should be left to correct itself.” Global free market theory has surfed “the waves of fear and disorientation” while advancing an ideology of “unfettered capitalism,” leaving inequality and degradation in its wake (Naomi Klein, award-winning journalist, fellow at the London School of Economics, author and filmmaker).

From Global Free Market: A Perspective and Admonition
at 1:31 PM