"Nothing is a mistake. There's no win and no fail. There's only make." — Sister Corita Kent 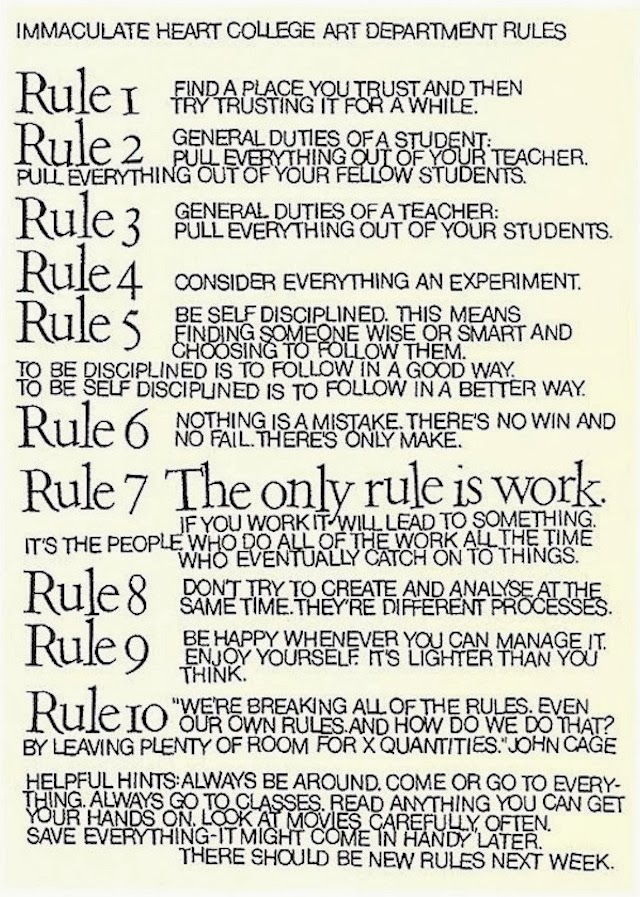 My dear friend Cheryl Ortega, UTLA's Director of Bilingual Education, sent me the following link this morning: How a Screenprinting Nun Changed the Course of Modern Art. Along with it she wrote: "I was privileged to have studied with Corita at Immaculate Heart College."

Reading and reflecting on the article made me think of a few things. The first was how Sister Kent's ten rules are the antithesis of the corporate neoliberal education reform project. Unlike the "banking concept of education" enshrined in Common Core State Standards (CCSS), Race to the Top (RTTT), No Child Left Behind (NCLB), and others, Sister Kent's rules center on love of learning instead of rote memorization. Rule 8 speaks to the nonsensical trope that through fastidious preparation for standardized tests, CCSS somehow promotes "critical thinking skills." A Freireian class devoted to exploring the "limit situation" of how can profit chasing firms like Pearson, PLC claim to care about pedagogy? —now that's something that would promote critical thinking.

Another thing that came to mind was the photo that Professor James Horn posted the other day under The Corporate Reform School First Grade. Imagine trying to explain Rule 6: "Nothing is a mistake. There's no win and no fail. There's only make." to Michelle Rhee, Arne Duncan, or Geoffrey Canada? Their corporate culture of "no excuses," "never accept good enough," and "college and career ready," has no room for a humane, student-centered pedagogy that rejects notions of failure and wining.

Cheryl and I were both heavily influenced by the Liberation Theology movement and its thinkers including Gustavo Gutiérrez and Paulo Freire. For us education reform is embodied by people like Sister Kent, who instead of subjecting students to filling out scantrons, brought them to local car washes for inspiration. That's the kind of education reform I've always advocated for.

I would write more on this, but am buried with schoolwork. I have several more journal articles to read today, and have two presentations to give on Wednesday; one on Heliodorus, another on Longus.