Parthenon Group Advises Schools, Education Industry, and Investors: How Could They Ever Lose?

The billions of ready cash from No Child Left Behind provided a dollar-powered incubator for the birth of the modern day education industry.  State and local education agencies in search of quick solutions to meet NCLB’s impossible demands desperately turned to business solutions, ranging from direct instruction products to more expansive plans for corporatization of schools and school governance.  NCLB’s focused control mechanism built on collection of test data and a primitive fear-based accountability provided a model for expansion of the education industry into higher education.
When combined with the ideological incentives to gain control of unions, re-position the teaching profession within corporate boundaries, and establish total social control over poor and minority populations, the profit possibilities triggered by NCLB gained traction like never before in American education.
With $700 billion at stake each year in education spending, schooling has become big, big business, a fact that has made corporate control at the federal and state levels paramount in order to keep the revenue streams running.   Among the most well-positioned and fattest parasites among a new consultant species is the Parthenon Group.  Rob Lytle heads its “Education Practice,” which is strategically burrowed into a corporate governing bureaucracy that advises large swaths of K-22 educational institutions, both public and private.
What makes Parthenon’s position most interesting, however, is the fact that Lytle and the jackals under his watch take the information gleaned from advising schools and colleges in how to establish new techno-efficiencies to then create flashy powerpoints to share with hedge fund gangsters, ed industry profiteers, and venture philanthropists looking to steer public policy while collecting huge tax breaks to do so.
Here is what Lytle told a group of investors in Manhattan in 2012 about the coming bonanza from Common Core:

Think about the upcoming rollout  of new national academic standards for public  schools. . . . If they’re as rigorous as advertised, a huge number  of schools  will suddenly  look really bad,  their  students testing  way behind in reading and math.  They’ll want help, quick. And private, for-profit vendors selling lesson  plans,  educational software  and  student assessments  will be right  there to provide  it. . . You start to see entire ecosystems of investment opportunity lining up. It could get really, really big.

In 2009, Lytle declared in another powerpoint aimed at higher ed investors looking to make a killing in the online business that “all students are not equal—some are more profitable than others.”

And just yesterday, Lytle was in DC at the Education Industry Days Summit with another powerpoint, “Parthenon Perspectives: What is Next in K-12 - Digital is Coming!”

How do we know “digital is coming?”  Because Lytle has been manufacturing opinion that says so.  Here is his slide to prove that "district decision makers" prefer technology over decreasing class size: 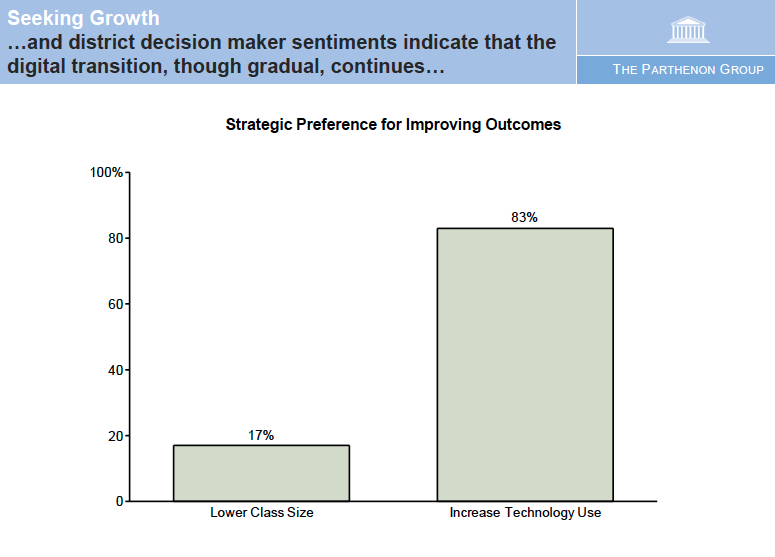 No doubt Lytle has another presentation that he uses with school officials that says that "increased technology use" has been shown in research studies by the Gates Foundation to be cost effective in raising scores than lowering class size.