A Tribute to Mike Sage, a True Fighter for Indiana Education and Children


Michael Sage passed away last Saturday.  He was a true crusader for children and a critic of school privatization in Indianapolis.   Through parent and activist Matthew Brooks, I met and talked with Mike several times while in Indy for book events, and Mike was one of the first in Indiana to promote Hoosier School Heist and my research in so many ways.


Mike was a sensitive and attuned soul.  I respect him immensely.


Here below is Parent Power Indianapolis’ John Harris Loflin’s tribute to Mike Sage.  It traces, among other things, Mike’s enormous positive influence in education and his many accomplishments for children in the city of Indianapolis and Indiana:


A TRIBUTE TO MIKE SAGE

Michael Kent Sage was a most unique Hoosier. Born and raised here, and a citizen of Indianapolis, Mike Sage loved that part of Indiana’s mid-west culture stressing conformity. It gave life and purpose to his basic noncompliant nature. He also loved the 1970’s during which he became of age. Mike fit perfectly into the anti-establishment and anti-war movements as well as the women’s rights, environmental rights, civil rights, and the student rights movements.


Mike was involved in the student “underground” at Washington Twp’s North Central H.S. in this era. His critique of traditional education helped inspire school staff there to create Learning Unlimited, Indiana’s first alternative public school of choice in 1974. In 1976, he helped Cities In Schools establish the Tech-300 Program at Arsenal Tech H.S. In 1978, he was director of Indy Prep, the first alternative school in IPS. He made sure this unique program loved and respected students.
He obtained a bachelor’s in Urban Studies from Indy’s Martin University and a master’s in counseling from the Christian Theological Seminary. He was a caseworker for Branches of Life Foster Care and so a defender of the rights of children in and after foster care.


In early 2012, Mike formed the Education-Community Action Team, a grassroots group questioning both IPS and corporate school reform. He wanted to make sure we “...do not leave education reform in the hands of 'experts' in business, finance, and law.” E-CAT continues Mike’s weekly breakfast each Friday morning around 9-9:30 at the Kountry Kitchen (19th/College). Anyone’s welcome. Check out E-CAT’s Facebook page at https://www.facebook.com/groups/287555804641345/
Mike is known locally for bringing youth to community meetings and events during the day and evening. He challenged both IPS and the Indiana Department of Education to 1) rethink job descriptions by requiring all employees to engage in providing direct services to youth, and 2) not allow student policies to be created by persons who do not currently engage with youth. Few adults have this level of understanding, commitment, and regard for young people.


As a critical friend of the privatization movement, he was one of the first to see through the guise and sales talk of the corporate school reform agenda of Dr. Tony Bennett, the Mind Trust, and the mayor’s Office of Education Innovation. He also exposed what he saw as the hidden political-economic agenda behind Teach for American, KIPP and Charter Schools USA, Chalkbeat Indiana, and the Stand for Children group whose “reformers” now run the IPS school board. From his perspective what was going on here with IPS and charter school expansion was actually gentrification and urban real estate development.


As a critical friend of traditional public education, he questioned the purpose of education at North Central H.S., and both inspired and ran alternatives to it. As the number of alternative programs grew in the 80s and 90s and became warehouses for students under-served by districts, he helped call out these schools as “soft-jails.” As a student and adult, he promoted student voice and proposed local school boards have a student representative. He knew children were naturally curious and didn’t need rewards or punishments to make them learn. Thus, he believed children learned from play and denounced those who stole playtime from children in order to make them good test takers.   This was besides his critique of standardized testing: ISTEP was “a false measurement” and didn’t assess anything.
Finally, he was an integral part of the Parent Power group and supported the democratic empowerment of parents and their ownership of their schools via the Local School Councils concept. Mike also co-authored the “Strength-based IEP” concept which proposes special education students get just as much attention paid to their strengths as their weaknesses. He had the “Education Cities” idea for Indy added to the Northeast Corridor Quality of Life Plan.


What made Mike unique among his friends was his insistence that they not use the verb “to be” (is, are, was, were, etc.) when writing because a verb of being implies an amount of certainty and perfection which in reality only exists in words and ideas. To him, such exactness gives the reader a false sense of life which Mike saw as “all a dance.”
Right or wrong, Mike Sage questioned authority, which made him insubordinate; he had a critical consciousness which made him a gadfly; he respected children as they are which made him disliked by disciplinarians; and, he rejected adultism which made him the enemy of those who are prejudice and discriminate against children and youth systemically.


We Hoosiers have not only lost a guardian of and champion for young people, we’ve lost a social justice warrior for all of us. Mike Sage is now the example we must strive to follow.


Below is a photo of Mike (left) and Doug Martin, taken by Parent Power Indianapolis' Merry Juerling, at the Rise Above the Mark movie event in Indianapolis: 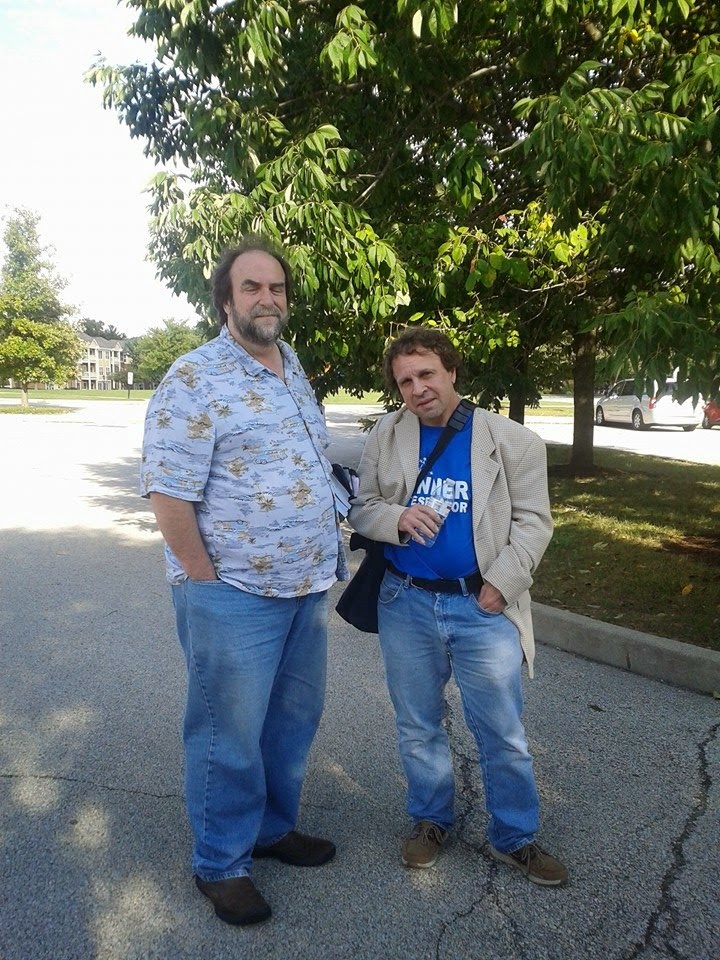