"In the US, teachers are paid poorly and treated even worse by having their priceless work reduced to meaningless scores on bad tests"—Joe Bower

The infamous Center for American Progress (CAP or C*AP maybe?) outdid themselves in the mendacity department this week. Not only did they try to pass off one of their usual neoliberal corporate education reform propaganda pieces as legitimate research, but they were caught using a photograph in the policy paper that contradicted their central thesis.

CAP's latest disinformation campaign is centered around attrition rates for new teachers. Chicago Teachers Union's honorable Karen Lewis posted the piece asking the venerable Jersey Jazzman about its veracity. He responded with some excellent analysis, and said "this "report" is light on methodology". He also mentioned offhand that "CAP is not a hacky group". I felt compelled to address the latter:

Robert D. Skeels: Center for American Progress (CAP) regularly does events with the fringe-right American Enterprise Institute (AEI) (e.g. http://www.aei.org/events/forward-progress-global-development-in-the-21st-century/ image used here is from that page). Why not? Their politics, particularly education policies, are nearly identical. In the past I used to always call CAP's press contact whenever they released one of these sensationally titled "studies." I'd ask them "is this a peer reviewed (juried) study or a policy paper?" Every time they'd respond the latter. I don't even waste my time asking them any more. While I have the utmost respect for the eminent Jersey Jazzman above, I would posit that CAP is a hacky group. Moreover, the only "progress" CAP is interested in is that of plutocrat profits.

This isn't the first, nor last time Schools Matter has pointed out both CAPs enormous credibility issues and right-wing leanings. For example in 2009: CAP, Chamber of Commerce, Rick Hess team up to Bash Public Schools. 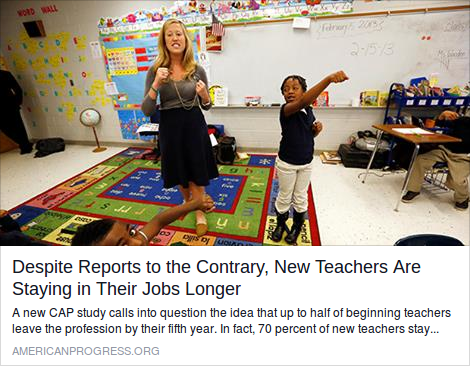 That same article was circulating BATs, and Professor Mitchell Robinson had some important information to share about the young Teach for [corporate] America missionary depicted in CAP's puff piece as a teacher, in CAP's words, "staying in their job longer", "despite reports to the contrary". Robinson's observations on the above photo:

I knew something didn't smell right about this story…

The "teacher" in this picture, Gabrielle Wooden, is…wait for it…from Teach for America. She taught in Mississippi for 2 years, and is now an account manager for Insight Global in St. Louis.

So, the teacher that the Center for American Progress used to illustrate their "story" on how new teachers are staying in the classroom longer only stayed for two years before leaving the profession.

You can't make this stuff up.

And he certainly didn't make it up. Here's Teach for [corporate] America's Wooden's LinkedIn profile, including the first paragraph of prose from the corporate entity with "revenues over $1 Billion" where our hapless CAP photo model now utilizes her 5.5 weeks of Wendy Kopp approved TFA training.

Insight Global is a premier technology staffing services firm, ranked as one of the fastest growing staffing firms for 9 consecutive years and named the 4th largest IT staffing firm in America. Since our inception in 2001, we have experienced unprecedented growth within our industry. We have expanded from an Atlanta based start-up to one of the most successful IT staffing firms in America, with 39 offices and counting. Insight Global employs over 20,000 people in companies each year and currently boasts revenues over $1 Billion. We plan to continue this growth by expanding to 98 offices nationwide, entering into industries such as Finance/Accounting, Administrative and Healthcare staffing, and continuing to expand internationally.

Robinson also weighed in on CAP:

CAP is about as "progressive" or "Democratic" as Democrats for Education Reform. Not sure what is meant by "hacky", but publishing "research" that has not been peer reviewed or including any of your methodology isn't just non transparent, it's borderline unethical.

In fairness CAP, on very rare occasions, publishes actual studies by legitimate researchers. Jersey Jazzman pointed that out, and the remainder of our exchange is reproduced here.

Jersey Jazzman: I'm not a fan of all of CAP's education work, but some of it is very high-quality: https://www.americanprogress.org/issues/education/report/2012/09/19/38189/the-stealth-inequities-of-school-funding/

Mitchell Robinson: That's a policy analysis--the article linked at the top of the page is a puff piece. Huge difference. CAP needs to police what they publish--it's their reputation.

Robert D. Skeels: I'm actually shocked that they would publish anything by Dr. Baker, but I know his work is of the highest quality and truthfulness. I suppose occasionally publishing legitimate material lets the C*AP reactionaries feel better about their constant stream of neoliberal corporate propaganda.

I am a fan of Professor Bruce Baker, the Jersey Jazzman, and now Professor Mitchell Robinson. Special thanks to Professor Diane Ravitch for leading me to the Joe Bowers quote, and for reproducing Peter Greene's take on the above topic.