Decaying Buildings and the Rise of Digital Education

by Wrench in the Gears 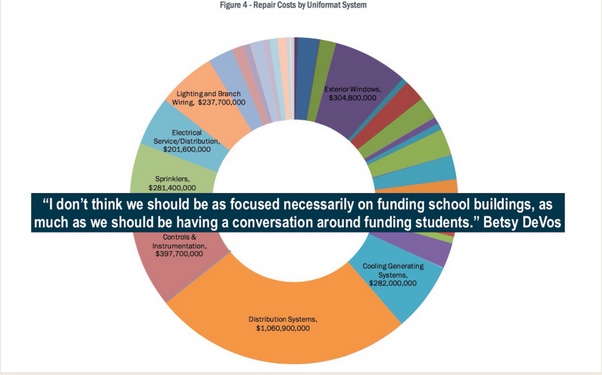 “DeVos doesn’t think we should be funding school buildings as much as students.” The line caught my eye as I scrolled through social media this weekend. How could it not? I’ve been working hard over the past year to try and convince other education activists that the true endgame of the reform movement is to make school buildings obsolete. So I listened to the video of DeVos speaking to attendees of the Magnet Schools of America National Policy Training Conference in Washington, and there it was at timestamp 11:40: “I don’t think we should be as focused necessarily on funding school buildings, as much as we should be having a conversation around funding students.”
DeVos, being from Michigan, surely knows the deplorable conditions students in Detroit face daily trying to access a free and appropriate public education. And Detroit is not alone. Parsons completed a Facility Condition Assessment for the School District of Philadelphia last month identifying $4.5 billion in deferred maintenance. Over $1 billion of that total involves life safety, code compliance, health hazards, accessibility, and security issues. Think about that. We are asking vulnerable children and school staff to enter buildings that are not safe five days a week, while at the same time the Secretary of the US Department of Education is proclaiming we should not be funding school buildings.

This week I also came across a legislative forecast for Educational Savings Accounts (vouchers) prepared by Jeb Bush’s group Excellence in Education. The info-graphic accompanying the report indicated that my home state of Pennsylvania was one of 13 states identified as having a 75+% chance of implementing ESA legislation in the coming year. Our schools are already in an incredibly precarious financial position after years of austerity budgets and onerous debt service. The combination of intentionally unsafe buildings and ESAs will likely end up pushing more families out of the public school system with devastating consequences for those who remain.