In a thinly-disguised political move by Maryland's Governor Ehrlich and soon-to-be-candidate for lieutenant governor, State Superintendent Nancy Grasmick, efforts are underway to stage a state takeover of 11 schools in Baltimore, possibly turning them into for-profit charters (corporate welfare schools)--paid for with tax money.

The plan is to use the inevitable NCLB-mandated school failures as the cudgel to beat down claims of school improvement by Baltimore mayor and gubernatorial candidate, Martin O'Malley (D). The Center on Education Policy's Jack Jennings, quoted in WaPo yesterday, has this to say about efforts by Grasmick and Ehrlich:

"What Maryland is doing will be a precursor to what a number of other states will do."

Whether or not Grasmick and Ehrlich are cut down by a political buzz saw that is already getting revved up in Maryland, I think Jennings has it right--this kind of state action is not only predictable but inevitable elsewhere. Unless, of course, we ditch NCLB next year or make serious modifications in it.

To hear the for-profit charter and voucher proponents tell it, however, they are shocked to hear that 25,000 American public schools have been labeled as failures already. Michael Petrelli, VP at one of the neocon's top education sludge tanks, the Fordham Foundation, said this in a Bloomberg.com propaganda piece that could have been written by Petrelli, himself:

"Most people thought that at this point in the law, we'd be seeing these numbers go way, way up'' as standards toughen."

The fact is that Petrelli and other privatization planners knew very damn well that there would be mass failure as a result of NCLB, and he also knows that we ain't seen nothing yet. As we move toward 2014, the states that have laid out modest goals for testing gains in the early years will have very large balloon payments coming due soon as we move toward the impossible goal of 100% proficiency by 2014.

Have a look at this slide (click slide to enlarge) from a presentation in 2004 by Bob Linn, An Evaluation of the NCLB Adequate Yearly Progress Requirements (pdf). Note: the comments beneath the slide are mine : 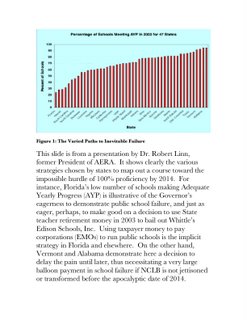 How likely will schools meet this ridiculous requirement of 100% grade-level proficiency? Here is a slide from a Massachusetts study on where Massachusetts will stand by 2014 if NCLB remains in effect:

If we can expect a 74% failure rate in one of the strongest education states, what can we expect in Louisiana?

And how long will the American public put up with this insanity?

Or will we simply roll over and let the education privatizers do their dirty work?
at 8:34 AM