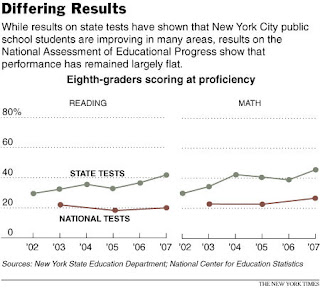 As the above chart from the New York Times shows, NYC student scores on the state test have increased over the past five years, while the NAEP (national) scores have remained flat. Even though Bloomberg's trumpet has been the loudest, this same phenomenon is occurring all over the country. Why? Because the schools, particularly the urban schools, are focused entirely and year-round on state test prep, while the NAEP is a bit wider kind of temperature-taking test of academic abilities.

Now there are plenty of people who want to turn NAEP or something like it into a national test, while getting rid of the state tests where school systems can "game" the system, as the Eduwanks and Eduwankettes like to say. This would, of course, only serve to turn the full-time test prep in schools toward the national test, which would, in fact, (as Jerry Bracey has pointed out repeatedly) destroy any value that tests like the NAEP now have.

The disturbing part of this story from the Times is that it points out a trend that can be seen in the national NAEP data: NAEP gains were higher before the current testing hysteria in America got underway. This suggests what many of us have known, which is that the accountability-through-testing fixation is making American school children stupid. Imagine that.

New York City’s eighth graders have made no significant progress in reading and math since Mayor Michael R. Bloomberg took control of the city schools, according to federal test scores released yesterday, in contrast with the largely steady gains that have been recorded on state tests.

The national scores also showed little narrowing of the achievement gap between white students and their black and Hispanic counterparts.

The results for New York and 10 other large urban districts on the federal tests, the National Assessment of Educational Progress, paint a generally stagnant picture for the city, although there are gains in fourth-grade math. On measure after measure, the scores showed “no significant change” between 2005, when the test was previously administered, and 2007.

Mr. Bloomberg has trumpeted improving state test scores as evidence that the city is setting the pace for urban school reform. But the federal scores, on a test often called the nation’s report card, suggest that the city’s gains are limited. Similar patterns of gains on state tests outstripping gains on the national assessment have emerged elsewhere as well.

New York City’s federal scores showed that while fourth-grade reading results have improved over the past five years, the most significant jump came in 2002, before Mr. Bloomberg took control. . . .

And, thus, another vaunted mayoral miracle turns out to be just another attempted corporate takeover of a another civic institution. Can we restore public control before it is too late?
at 9:34 AM