Public School Advocates Organize to Face Byrne and the Theocrats 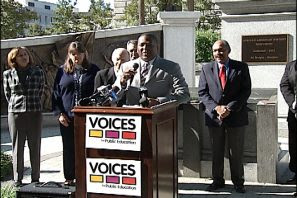 When the school voucher plan was crushed by Utah voters last week, South Carolina was named the next target in the battle against public education. It appears the reception committee might not be entirely friendly to the internet junkman:

After voters in Utah Wednesday rejected a school voucher plan there, the main financial backer of the plan, Patrick Byrne, says he'll focus his efforts on African-American churches in South Carolina. Byrne is founder and CEO of Overstock.com.

Thursday morning, former governor and U.S. secretary of education Dick Riley and former state Supreme Court chief justice Ernest Finney announced that they're leading a new coalition opposed to school vouchers. It's called "Voices for Public Education", and it's made up of African-American educational, business and service organizations.

When Riley was governor, from 1979 to 1987, he pushed through the Education Improvement Act, which raised the state sales tax by one penny with the money going to improve schools.

"Vouchers, tuition tax credits, only distract us from our ability to work on real solutions," he said at a news conference at the African-American History Monument at the Statehouse.

Finney added, "The state of Utah on yesterday voted down vouchers. And, interestingly enough, one of the leaders of that movement that got beat in Utah indicated that that movement was going to now spearhead and pinpoint South Carolina and the black leadership in South Carolina as an entity which they could move into and do what they want to do here, which is undercut our public education system."

Columbia attorney Steven Benjamin said the purpose of Voices for Public Education would be to dispel and counter any pro-voucher efforts.

"We've been formed in response to recent tactics by pro-voucher out-of-state interest groups to mislead African-American communities into believing that vouchers are the solution to reform in our public schools," he said. . . .