Work Hard, Be Nice, and Other Lies My KIPP Teacher Told Me 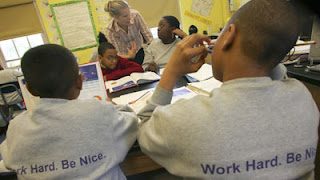 For white philanthropists, the major appeal of the KIPP charter chain gang schools is the non-stop behavioral control system aimed at producing compliant worker bees who learn to internalize any real or potential shortcomings as evidence of individual weakness or failure. If things don't work out, then, as the KIPP brainwashers promise, then who is to blame? This is not a new pedagogical approach--it was used successfully at Hampton Institute in the late 19th Century to train a generation of black teachers like Booker T. Washington, who would become complicit in their own subjugation and that of their brothers and sisters.

For black parents, the KIPP appeal is the promise that for those who "work hard, be nice," there is a new world of opportunity waiting to embrace their efforts. Hope, however groundless, remains the only alternative to despair.

New studies by Pew and reported in WaPo show some disturbing realities that are troubling at least, even though they are likely to be ignored by the keep-on-the-sunny-side world of those who have been KIPP-notized.

A couple of clips here:

Nearly half of African Americans born to middle-income parents in the late 1960s plunged into poverty or near-poverty as adults, according to a new study -- a perplexing finding that analysts say highlights the fragile nature of middle-class life for many African Americans.

Overall, family incomes have risen for both blacks and whites over the past three decades. But in a society where the privileges of class and income most often perpetuate themselves from generation to generation, black Americans have had more difficulty than whites in transmitting those benefits to their children.

Overall, family income of blacks in their 30s was $35,000, 58 percent that of comparable whites, a gap that did not surprise researchers. Startling them, however, was that so many blacks fell out of the middle class to the bottom of the income distribution in one generation.

Ronald B. Mincy, a Columbia University sociologist who has focused on the growing economic peril confronted by black men and who served as an adviser on the Pew project, said skeptical researchers repeatedly reviewed the findings before concluding they were statistically accurate.

"There is a lot of downward mobility among African Americans," Mincy said. "We don't have an explanation."

Pew hopes to develop some answers in future reports in its series on economic mobility. Reports scheduled to be released early next year will probe, among other things, the role of wealth and education in income mobility.

Mincy and others speculated that the increase in the number of single-parent black households, continued educational gaps between blacks and whites and even racial isolation that remains common for many middle-income African Americans could be factors.

"That's a stunner," said Orlando Patterson, a Harvard University sociologist, when told about the Pew finding. "These kids were middle class, but apparently their parents did not have the cultural capital and connections to pass along to them."

Another reason so many middle-class blacks appear to be downwardly mobile is likely the huge wealth gap separating white and black families of similar incomes. For every $10 of wealth a white person has, blacks have $1, studies have found.

"We already knew that downward mobility was much more likely for blacks," said Mary Pattillo, a Northwestern University sociologist who studies the black middle class. "But this is an even bigger percentage drop than I have seen elsewhere. That's very steep."