A New Majority of the Poor in Southern Public Schools 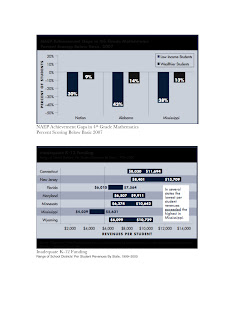 All across the South, small town businesses have been shuttered as new Super Wal-Marts spring up out on the bypasses, leaving the town squares weedy and broke, where people peck out a living from odd jobs and food stamps. Manufacturing jobs that once offered steady employment have been exported to China and India, where slave labor now makes the goods that show up on the toxic shelves of those southern Super Wal-Marts that offer the "everyday low prices" that the broke and destitute must now be thankful for.

The big houses on the west end of Main Street have been bought up by retiring yankees who have cashed out on Wall Street to enjoy their golden years in the sub-tropical glow of an imagined small town life that disappeared even before the original owners died. These new transplanted residents hire the illegals to cut their grass and clean their houses and boats down at the land-locked marina where the lake is disappearing. At night loud pickup trucks prowl the streets and roads, keeping alive an underground economy based on illicit trade, pot production, and the manufacture of crystal meth.

Back in the other world that most of us consider the real one, a new report from the Southern Education Foundation now shows that low income students constitute a majority of school populations in 11 out of 15 Southern states (AP piece here). A couple of their charts are included here (click charts to enlarge).

This is the new, New South, the hotter, drier one that is suffocating from an epidemic of morbid obesity, diabetes, and addiction--the one where anger is quickly replacing hope in those who have not yet entirely despaired.

Nooses in school yard trees? With the Federal government turning its back on civil rights enforcement and the economic, health, and education needs of its rural and small town people, I'm afraid you ain't seen nothing yet.
at 10:21 AM