Last evening Benjamin Barber was on with Bill Moyers talking about the imminent suicide in the works for American capitalism. While some capitalists work to create products that people actually need to make their lives more livable, the American model is based on using advertising to manufacture a need that no one has until they view the ad. See Elmo and IPhone.

WordGirl, the PBS cartoon superhero actually has a great children's explanation of the phenomenon, but unfortunately, the villainous businessman, Mr. Big, is the only villain we cannot view on any of the clips from the PBS site. I guess we wouldn't want children to start questioning buying practices right around Xmas. So here is Bill Moyers's summary:

On this weekend before Christmas, I'm struck by a paradox. The news is not so joyous. Housing prices and home sales down…more foreclosures predicted…oil near $100 a barrel…the dollar's sinking food prices rising recession looming and yet, on television, and just about everywhere we look, people squeezed to the breaking point are constantly being told to buy buy buy.

AD: Why not let your kids decide?

BILL MOYERS: And if necessary, to go into hock to do it.

AD: Its easy! Even if you've been turned down before, you could be driving."

BILL MOYERS: Commercials even go out of their way to make adults into children and children into consumers.

AD: Make sure you get the right highlighter.

BILL MOYERS: There is some resistance to this constant commercializing. Watching early morning cartoons with my grandchildren the other day, I discovered word girl the PBS series of a fifth grade superhero fighting evil with her amazing vocabulary

WORLDGIRL: Listen for the words vague and specific

BILL MOYERS: In this episode, the villain, Mr. Big, has flooded the market with a brand new product called 'the thing' which everyone has to have

WORLDGIRL EXCERPT: "THE THING" can do all sorts of stuff! Get one today at a low, low price.

BILL MOYERS: What is it? No one knows or seems to care but as commercials for the thing hit the airwaves, citizens everywhere are seduced into believing they can't live without it, so they descend in droves to buy as many as they can get. Enter: Word Girl!

WORDGIRL: Everyone stop, you're being tricked! The Thing doesn't do anything!

PERSON 1: Yes it does! It does so much stuff!

PERSON 2: The commercial says I needed one for my boat!

WORDGIRL: You don't have a boat!

PERSON 2: Hon, we need a boat for our THING!

WORDGIRL: You don't need a THING!

PERSON 2: But the commercial says !

BILL MOYERS: Watching all this, it seemed a good time to put in a call to Benjamin Barber. Like WordGirl, he's standing athwart history and shouting stop.

You may remember Benjamin Barber from his international best seller, JIHAD VERSUS MCWORLD. Among other things, he's a renowned political theorist and a distinguished senior fellow at Demos — a public policy think tank here in New York City.

His latest book is CONSUMED, about how the global economy produces too many goods we don't need, too few of those we do need, and, to keep the racket going, targets children as consumers in a market where shopping is a twenty-four hour business. Capitalism, he says, "seems quite literally to be consuming itself, leaving democracy in peril and the fate of citizens uncertain." Benjamin Barber answered my call - and he's with me now.

The same kind of consumer capitalism and marketeering has struck our civic establishments, including our educational institutions. Choice is first, the customer is always right, and control of market share is based on convincing the customer you have a better deal for him than the next guy. In K-12 education, such thinking is quickly eroding the civic responsibility for educating the nation's children toward perpetuation of the moral and political values of the Republic. Never mind that the charter choices and the voucher choices never get close to offering the pickings of the wealthy who can afford real choices. Charters and vouchers are choices for the poor and are made attractive by advertisers and media and the New York Times, all intent upon keeping the poor quiet and invisible. How else to explain the NY Times headline, "Charter Schools Outshine Others as They Receive Their First Report Cards," when the story goes on to tell how the City cherry-picked 13 charters to get the superior results they need to justify their charterizing.

The marketeering has struck the American university as well, and the advertising battle for students will undoubtedly continue to yield "new and improved" program configurations that can be completed by consumer students in less time with less sacrifice and with more convenience for the consumer/student. Never mind that the adjuncts hired to teach these "technology-rich" courses are choking on the keyboarded and semi-literate "dialogue" that students churn out while lounging in their jammies on the sofa. If the time were actually counted for these overworked adjuncts and instructors in these techno courses, it would probably be less than minimum wage at most universities.

Of course, the Top Tier universities do not have to clamor for customers and, therefore, are not forced to compete in the great unwashed marketplace of compressed credentials. So while the less endowed colleges and universities actively battle with their compression algorithms in the enrollment wars, the Top Tier benefit from a national marketing strategy that has convinced a public, now bulging, yet hungry for more stuff, that a college degree is the THING that everyone needs, despite all the evidence to the contrary. The degree THING does stuff and gets you stuff, right? But we all know the REAL THING only exists in those colleges and universities that don't have to compete for customers, where, in fact, the customers are competing to get enrolled so that they can get the REAL THING.

In the meantime, those who don't have a chance to get the THING, and certainly not the REAL THING, become acquiescent to their fate, and thus, quite convinced to take anything offered them as a way to survive the American dream that no one will wake them from. And those who do get their THING? They find out that everyone they know already has one, too, and it really doesn't do most of the stuff that it was supposed to do. And all those expensive texts and books that haven't been sold back yet? They will go into rental storage or portable storage with all the other THINGS that we have traded the best parts of our souls to obtain. Did you hear that Britney's sister is pregnant?

So our brand of capitalism is entirely bankrupt, and it is only a matter of time until the final death rattle sets in unless things change. But being the avid and ever-optimistic educator, I know change is possible. One small example provided by Benjamin Barber last evening: Life Straws. 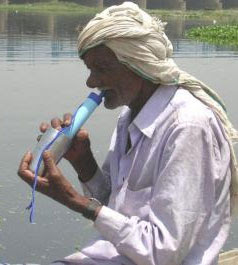 Remember that capitalism used to be about creating and providing products the people actually need? What do most people need now for which there is a great shortage that is likely to get worse? Water. One small Danish company is getting very, very rich on products that people need that can solve a problem, rather than create another one. They call it IMAGINEERING. I love it. Now here is a real holiday gift idea:

There are gadgets that make life more fun, and then there are gadgets that make life possible. The LifeStraw from Denmark's Vestergaard Frandsen Group has the potential to fall into the latter category. A device about the size of a large pen or drinking straw, the LifeStraw is a complete water purification kit that draws its power from the person sucking down the water. The LifeStraw is the product of ten years of development work, based on the goal of creating an efficient, affordable water-purification system for the developing world, where water-borne illnesses are a major killer. When produced in quantity, each LifeStraw — which uses a combination of mesh filters, iodine-impregnated beads and active carbon to remove particulate matter and bacteria — is expected to cost under $2 and be able to provide a year's worth of pure drinking water. . . .

Email ThisBlogThis!Share to TwitterShare to FacebookShare to Pinterest
Labels: capitalism