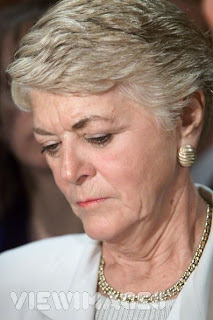 And then the racist insult:

"I have to tell you that what I find is offensive is that everytime somebody says something about the campaign, you're accused of being racist," Ferraro told Fox News Channel.

" 'Any time anybody does anything that in any way pulls this campaign down and says let's address reality and the problems we're facing in this world, you're accused of being racist, so you have to shut up. Racism works in two different directions. I really think they're attacking me because I'm white. How's that?' "