Michelle Rhee In Black Astride Her Broom--Hmm

Time Magazine now joins Newsweek and Bill Gates's $3 billion in blasting away at the due process and collective bargaining rights of teachers, while pumping the brass knucks approach to charter reform schools that has made Michelle Rhee the cover girl for the anti-public-education movement. This week's salvo from Time pulls out the big guns, with senior writer, Amanda Ripley assigned the duty of creating a major piece of teacher bashing and public school castigation.

Predictably, Ripley begins with same lies that mainstream corporate media have been using since Ronald Reagan came to town:

The U.S. spends more per pupil on elementary and high school education than most developed nations. Yet it is behind most of them in the math and science abilities of its children. Young Americans today are less likely than their parents were to finish high school. This is an issue that is warping the nation's economy and security, and the causes are not as mysterious as they seem. The biggest problem with U.S. public schools is ineffective teaching, according to decades of research. And Washington, which spends more money per pupil than the vast majority of large districts, is the problem writ extreme, a laboratory that failure made.

Or is that a failure that Ripley made with her lazy and biased generalizations that are not supported by anything more than the media mythology she inherits from her privatization preferring predecessors. If Ripley were to look beyond the talking points prepared for her by pay-based-on-test-scores advocate and Hoover Fellow, Eric Hanushek, she would see that it is not teacher rights that are eating away DC Schools nearly so much as it is a long-standing malignant neglect and a continuing history of unaddressed poverty. If teacher job security and unions were the culprit, it seems that the suburban schools would be suffering the same as the urban schools, yes Amanda? 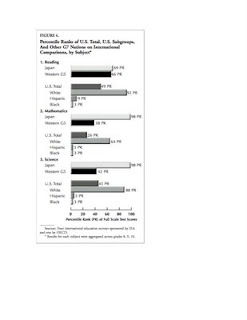 And yet, as the chart (click to enlarge) shows from the research by Boe and Shin from the University of Pennsylvania (published in Kappan, October 2005), white American students, when compared to the average scores from the G5 countries, are doing just swell in the international test score comparison derby. Knocking them dead, in fact. It is only when you add in the poor students scores, both brown and black, that the comparisons become usable by the school privatization crowd to perpetuate their myth of failing Amerian schools. The failure is the American failure to address the disgrace that is povety. When will the media ever include these facts in a story on American public education? Ever?

Do a little reading, Amanda Ripley, before you put the Dragon Lady up for Time's Person of the Year. It might save you some real embarrassment down the road. Here is a clip to get you started, the conclusion from the Kappan piece by Boe and Shin:

Based on our review of the results of six international achievement surveys conducted from 1991 to 2001, we conclude that U.S. students have generally performed above average in comparisons with students in other industrialized nations. Certainly there is variability in performance, with the U.S. scoring above average in reading and civics, average in science, and somewhat below average in mathematics. But even in mathematics at the middle and secondary levels, the U.S. did not perform “poorly.” On the positive side, U.S. aggregate scores were above average in all subjects at the elementary levels and in reading and civics across grade levels.

How then can we explain the common perception that the U.S. generally performs poorly in the international achievement horse race? There are several plausible reasons for this, all of which might be partly correct. First, many consumers of comparative achievement statistics simply are not aware of the results of the full array of surveys that have been conducted in recent years. This may be due, in part, to the selective reporting of bad news and neglect of good news common to the press.23We hope the results reported here will provide more comprehensive factual information on which anyone can base generally valid conclusions about the achievement of U.S. students in international comparisons.

Second, it may be that others are aware of the achievement results of the full array of surveys but simply view average results as poor because they expect the U.S. to be “first in the world” academically, as it is in economic strength and military power. In this view, anything less than first place is regarded as a poor performance. Some actually might have taken seriously the political hype represented in the able public monopoly that must be privatized as much and as quickly as possible. The biased selection of evidence is not a surprising or uncommon strategy for advocates of a particular cause and may have strong policy and political impact.26

Is it reasonable to expect that in the next few decades U.S. student achievement in mathematics and science will improve to the point where assessment scores are substantially and consistently well above average? Regardless of current efforts to improve public school outcomes, this seems most unlikely. At best, we can hope for incremental improvement such as that which seems to have occurred in recent years based on our results in comparison with international surveys administered before 1991.27

This article should not be read as a defense of the status quo or an apology for inadequacies in U.S. public education. There is always room for improvement. In fact, all nations seem to be displeased with their education systems and levels of attainment. In the mid-1990s, the OECD sponsored an international study of innovative methods in mathematics and science instruction in 23 nations.29One of the interesting findings was that none of these nations, including some that performed well above average in the international horse race, was satisfied with their mathematics and science teaching and learning. All were striving to improve, just as the U.S. has been — especially since the release of A Nation at Risk in 1983.

In recent years, the U.S. has not performed “poorly” in international comparisons in a statistical sense. Consequently, an allegation of poor performance should not be used to tarnish the constructive work of the majority of public educators and the genuine attainments of U.S. students. Nonetheless, the public and policy makers should continue to expect and demand improvements in instruction from educators and the educational system and improvements in learning from students — especially in those subjects and grade evels where student achievement plainly lags. Likewise, the public and policy makers should give credit where due and recognize genuine achievements in providing effective instruction by educators and in effective learning by students.