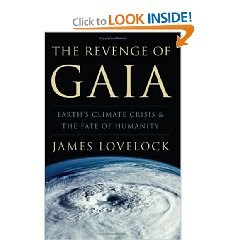 All of the planned economic recoveries, foreign policy victories, health care rescues, fairer trade pacts, new school building plans, and the rest will be for nought if the climate crisis is not addressed now, tomorrow, and all the days after that. And even though an urgency exists that language cannot capture adequately, it may be boiled down to the simple acknowledgment that human civilizations and species survival hang in the balance.

Can the threat be real enough to make me an advocate for nuclear power plants as part of the solution? Yes it can, or, you betcha--whichever you prefer. (See Lovelock).

As Al Gore points out in today's NYTimes, all of our important priorities can work toward the ultimate goal of saving the Planet if we can turn hope and audacity and native ingenuity into planning and immediate implementation of pragmatic solutions. Solving the climate crisis is the only high stakes test of this and the next generation that matters. A clip:

THE inspiring and transformative choice by the American people to elect Barack Obama as our 44th president lays the foundation for another fateful choice that he — and we — must make this January to begin an emergency rescue of human civilization from the imminent and rapidly growing threat posed by the climate crisis.

The electrifying redemption of America’s revolutionary declaration that all human beings are born equal sets the stage for the renewal of United States leadership in a world that desperately needs to protect its primary endowment: the integrity and livability of the planet.

The world authority on the climate crisis, the Intergovernmental Panel on Climate Change, after 20 years of detailed study and four unanimous reports, now says that the evidence is “unequivocal.” To those who are still tempted to dismiss the increasingly urgent alarms from scientists around the world, ignore the melting of the north polar ice cap and all of the other apocalyptic warnings from the planet itself, and who roll their eyes at the very mention of this existential threat to the future of the human species, please wake up. Our children and grandchildren need you to hear and recognize the truth of our situation, before it is too late.

Here is the good news: the bold steps that are needed to solve the climate crisis are exactly the same steps that ought to be taken in order to solve the economic crisis and the energy security crisis.. . . .