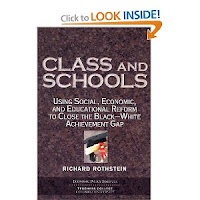 Someone pass that young man a copy of Rothstein's Class and Schools.  There is real hope here.  At least he is trying:


. . . . If there’s a lesson for Obama and his education secretary, Arne Duncan, to learn from Fenty’s defeat, it might be that significant segments of the public—including the urban public school parents who have the most potentially to gain—are skeptical of the White House’s school reform agenda, which adopts many of the priorities of the Bush administration, including high-stakes standardized testing and tough accountability measures for neighborhood schools. While many in the media champion these policies, school reformers so far have failed to make the case to communities, who see their local schools not only as student achievement factories, but also as storehouses of community history, sources of jobs, and even repositories of racial pride.. . .