The Fake Science Behind Single-Sex Schools for the Poor

The natural repulsion of children to the repressive reality of today's urban penal pedagogy systems is often registered first by boys, who are less likely than girls to have been socialized to sit quietly, listen, remain passive, and to parrot back what the teacher says.  And since this kind of resistant reaction by boys to school as chain gang could not be read by the perpetrators as an indication that there may be something essentially abusive with teaching children to act like robots, another explanation for the resistance and bad test scores of boys had to be found.

The explanation that was hit upon and is now being exploited as a niche corporate charter market based on another age-old form of oppression against girls and women and a form of miseducation for boys on how differently they learn from girls.  And so the "boy crisis" is born, complete with gender segregation rationales based on pseudo-science and the basest of chauvinistic folkways.

A "boy crisis" empire has grown up, in fact, led by Dr. Leonard Sax (rhymes with quacks) who has ground out four books out on the subject since 2005.  Dr. Sax is not only keen to design learning environments where boys can be active, loud, and strong while still learning like parrots, but he is equally keen to re-write Title IX to reflect the quackery that he cites as the science of gender differences.

And in this era of white men wanting their country back--way back--it should come as no surprise that this new form of segregation on top of the other segregation has found fertile ground in the first state to secede from the Union to protect slavery, South Carolina.  From the piece last month in WaPo by Karen Houppert: (my bolds)


South Carolina leads the way on single-sex education. Thousands of children throughout the state are enrolled in 160 participating public schools, and another 160 schools are weighing the option for the fall.


South Carolina teachers are conducting the workshops for 400 fellow educators from around the country. The participants have their choice of sessions, including "Smart, Sassy, and Stylish: Gender-specific procedures and strategies that can be used in the all girls elementary curriculum," "Mean Girls: Building Community In An All Girls Classroom," "Using the Glorious Gift of Gab and Glitter: How to use what comes naturally to girls to enhance classroom instruction," "Throw it, catch it, make it move: Teaching middle school boys through movement," and "Boys and Literacy."

What irony to find educators leading the charge to undo the hard fought understanding that took generations to achieve.  Over 200 years after Mary Wollstonecraft had this to say the "gift of gab and glitter":


Taught from infancy that beauty is woman's sceptre, the mind shapes itself to the body, and roaming round its gilt cage, only seeks to adorn its prison.

But do not despair--the voice of reason is strong, and this version of stupidity and miseducation does not go unchallenged.  Again, from Houppert's article:


. . . .In his 2005 book, "Why Gender Matters," Sax cites a 1999 Virginia Tech study, where researchers found that boys' brains were developmentally years behind girls' when it came to qualities such as fine motor skills. That put the boys at an immediate disadvantage in school, where many are frustrated by trying to read and write before they're ready, Sax says. As a result, he says, many boys often check out mentally and underperform.

"At what age do we find the single-sex format has the greatest capacity to not only boost educational achievement but to change the academic trajectory?" he asks rhetorically. "The earlier, the better."

But Lise Eliot, a professor of neuroscience at the Chicago Medical School, doesn't accept the arguments for single-gender schools. "I'm a neuroscientist, and this claim that boys and girls learn differently because their brains are different is just not supported by real scientific data," she says.

Eliot, the author of "Pink Brain, Blue Brain," says she assumed she'd find a slew of powerful differences between girls' and boys' brains but grew frustrated by the research. "If you put all the research together, you are very underwhelmed by the difference," she says. "Boys do have bigger brains than girls, but they also have bigger bodies -- and hearts and lungs -- so I can't get too excited about that. This whole Mars versus Venus idea that our minds are from different planets is really inaccurate."

Eliot says girls reach puberty two years earlier than boys, but separating what is biologically driven from what is culturally imposed can be tricky, especially considering that the messages girls and boys get start at birth.

In her book, Eliot describes a child development study published in the Journal of Experimental Child Psychology in 2000 where mothers put their 11-month-old infants on a platform and adjusted the incline of a ramp to a level they thought their babies could crawl safely down. Mothers of girls consistently put the ramp at a less steep grade than mothers of boys; yet, when scientists tested the babies' actual abilities to take a steep incline, the infants were equal.

This experiment shows that modern parents -- and teachers -- like to think they are gender-neutral, but maybe they're not, Eliot says. Boys may be "risk-takers" because parents encourage it; girls may be more cautious because parents are nervous on their behalf.

By the time children are 2, Eliot notes, they already have a profound understanding of gender and want to belong to their groups. The messages they get in the wider world of grandparents, preschools and books reinforce the rules: Girls wear pink, play house and read books in which Cinderella and Sleeping Beauty are praised for their gentle kindness and beauty, occasionally sobbing at cruel injustice; boys wear blue, play with blocks, and read books in which Robin Hood and O'Malley the alley cat are fierce, combative, brave and never cry.

There are some genetic and hormonal differences between boys and girls, Eliot says, explaining that there are compelling examples, such as research showing how boys and girls gravitate toward different toys.

"But our culture exacerbates small differences by putting a wedge in and forcing boys and girls further apart. ... If we teach them together, we stand a far better chance of equaling things out.". . . . 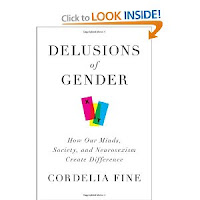 Finally, there is today a book review in WaPo of what appears to be an excellent book by Cordelia Fine.  An excerpt of the review:


. . . .Two of her [Fine's] favorite targets are John Gray, author of the "Men Are From Mars, Women Are From Venus" books, and Louann Brizendine, author of "The Female Brain" and "The Male Brain." Fine's preferred illustration of Gray's "neurononsense" is his discussion of the brain's inferior parietal lobe, or IPL. The left IPL is more developed in men, the right IPL in women, which for Gray illuminates a lot: He says this anatomical difference explains why men become impatient when women talk too long and why women are better able to respond to a baby crying at night. Fine dismisses such conclusions as nothing more than "sexism disguised in neuroscientific finery."

Gray lacks scientific credentials. Brizendine has no such excuse, having been trained in science and medicine at Harvard, Berkeley and Yale. And Fine saves her big guns -- and her deepest contempt -- for her. For the purposes of this critique, Fine fact-checked every single citation in "The Female Brain," examining every study that Brizendine used to document her argument that male and female brains are fundamentally different. Brizendine cited hundreds of academic articles, making the text appear authoritative to the unwary reader. Yet on closer inspection, according to Fine, the articles are either deliberately misrepresented or simply irrelevant.

"Neurosexism" is hardly new. Fine traces its roots to the mid-19th century, when the "evidence" for inequality included everything from snout elongation to "cephalic index" (ratio of head length to head breadth) to brain weight and neuron delicacy. Back then, the motives for this pseudoscience were transparently political: restricting access to higher education and, especially, the right to vote. In a 1915 New York Times commentary on women's suffrage, neurologist Charles Dana, perhaps the most illustrious brain scientist of his time, catalogued several differences between men's and women's brains and nervous systems, including the upper half of the spinal cord. These differences, he claimed, proved that women lack the intellect for politics and governance.. . .