The same day that the Globe was telling the story of 50 Harvard doctoral students protesting the takeover of the Graduate School of Education by technocrats, economists, and other corporate water carriers for the Oligarchs, the School warmly welcomed the nation's most morbidly obese bully governor to belch his rapacious poison against his own teachers, who until now, have helped New Jersey attain top five status in terms of NAEP results.  But all that matters not a whit, as New Jersey's militantly-ignorant governor has made clear through his first fumbling Secretary of Education, Mr. Schundler, who said publicly that NAEP scores were irrelevant. 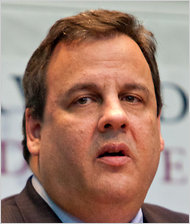 Since that utterance, we have come to understand the profound honesty of those fool remarks, for NAEP results or nothing else matters in the continuing assault by the corporate Borg, of which Christie is a supersized chunk, an assault on collective bargaining and on the teaching profession.  Christie is the doublewide poster boy for the utter bankruptcy of the low achievement excuse that has been used for the corporate takeover of schools in the past.

Urban America is in the cross-hairs of the Oligarchs, and a hostile corporate occupation is underway in the takeover of schools and the subjugation and containment of urban children in total compliance apartheid KIPP-notizing camps. This is the new eugenics, wherein reproductive sterilization has been replaced by a more nuanced psychological sterilization that leaves children as compliant as Seligman's dogs under the spell of his learned helplessness experiments.

The Mammoth One (photo by Erik Jacobs, NYTimes) did make news yesterday, although it was not news to anyone who knows of the Oligarchs' hostility to publicly-elected school boards (see Arne Duncan).

He [Christie] broke some new ground in saying that he planned to change New Jersey’s system of elected local school boards, though he did not say how. . . .

“They’ll be the next step,” he said. “Even for me there’s just so much you can swallow at one time.”

Hard to believe, indeed.  But we all have confidence in your appetite, Sir--if nothing else.