As the spokesman for the testing industry in general and for Kaplan in partiular (thank you, Kaplan, for paying Jay's salary), Jay Mathews lost credibility as a reporter a long time ago.

When Jay signed on as KIPP's man in the print media, a previous lack of credibility earned from disfiguring the facts turned to public dismissal as dissembling degenerated to all-out bullshit, as defined by Frankfurt in his book, On Bullshit:


He [the bullshitter] does not reject the authority of the truth, as the liar does, and oppose himself to it. He pays no attention to it at all. By virtue of this, bullshit is a greater enemy of the truth than lies are.

How does the role of bullshitter fit Jay?  Try this paragraph from his attack yesterday on the Miron report:

The Miron report leaves the impression that the researchers are not here to help raise student achievement, but to act like racetrack monitors and make sure every competing model is obeying rules designed to make sure nobody gets an unfair advantage. They are not looking for ways to help horses run faster and more safely. Instead, they want to make sure everyone has the proper weights and other equalizers to make it a fair race, when the idea should be not to decide who gets the blue ribbon, but how to improve all schools.

A worthy goal for social advocacy, Jay, but not one for credible researchers whose job it is to ascertain the facts, i. e., the truth.  But since KIPP is in the business of advocacy, it would be a worthy goal for them and you to heed your own advice for other educational advocates.  But your advocacy, Jay, and that of KIPP is only for the KIPP brand, rather than for all schools.  They came to bury public schools, not to help them win a blue ribbon.
To use your horse-racing metaphor (in which case it may be appropriate to revert to horseshit rather than bullshit), you and KIPP, Inc. insist on keeping only the strongest horses, while turning out the rest to your competitors while insisting that they be run against your stable without a handicap.  Not only that, but KIPP Farms would demand needed resources from their competitors who must then carry more weight in the saddle, while KIPP Farms hoards a stash of hundreds of millions of dollars that it may use as it sees fit to perfect its corporate branding and training program.  And who is to make sure that KIPP horses are not being doped or abused?  Why, KIPP insists on self-policing and no outside regulations, while demanding every form of oversight and accounting for their competitors.  Any wonder how KIPP Farms could be winning this test race?
Here is another example from Mathews, whose bullshitting is exemplary here:

I wish the Miron report would more directly confront the fact that some of the recommendations it makes for KIPP, particularly its call to recruit more disabled and English-language-deficient students, violate charter school laws. KIPP cannot promise that students it recruits will be admitted if there are more applications than there are places at the school. In such circumstances, selection has to be by random lottery.

More bullshit.  Notice that Mathews does not deny the fact that KIPP's test scores receive a big bump because they serve far fewer ELLs and SPED students.  (See Miron chart below--click to enlarge): 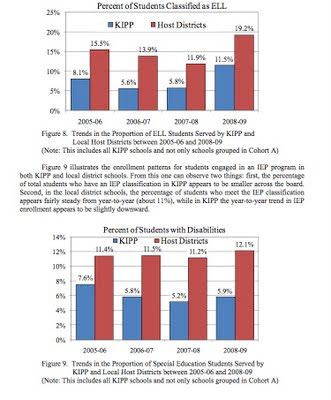 Jay is unconcerned with the truth of this matter, even as he makes excuses by hiding behind sloppy corporation-serving charter laws that do not require charters to hire teachers who are certified in special education or who have ESL certification. Most require no certification at all.  What parent with a special needs child is going to send that child to a school with a one-size-must-fit total compliance lockdown system.  Mathews remains unconcerned with this truth as he promotes his corporate cause.  The truth does not matter.  Here is what the Miron report said in the Policy Implications section:

If KIPP wishes to maintain its status as an exemplar of private management of public schools, rather than a new effort to privatize public schools, it will need to convince policymakers and the public that it intends to recruit and serve a wider range of students and that it will be able to do so with sustainable levels of funding comparable to what other traditional public schools receive.

Before KIPP can be considered a model to be widely replicated, it has to be committed to serving all the students it admits and to serving a portion of the students who are mobile,  including those who require a place in the middle of the school year, after the cut-off time for public funding to follow the student. Furthermore, to be considered a viable contributor to a system of public schools, KIPP also needs to recruit and serve a reasonable share of students who are more costly to educate, especially students with disabilities and students who are not native English speakers. The limited range of students that KIPP serves, its inability to serve all students who enter, and its dependence on local traditional public schools to receive and serve the droves of students who leave, all speak loudly to the limitations of this model. Furthermore the funding KIPP receives from public and private sources—more than $6,500 more per pupil in addition to what local school districts receive—is not likely to be sustainable in the longer run . . . .