The Nation has published a propaganda trove that the Kochs sent out last fall before the election to tell employees, their families, and anyone else unfortunate enough to encounter this mess how to get their political minds right.


The Nation obtained the Koch Industries election packet for Washington State—which included a cover letter from its president and COO, David Robertson; a list of Koch-endorsed state and federal candidates; and an issue of the company newsletter, Discovery, full of alarmist right-wing propaganda.

Below are a few clips.  This first excerpt gives you a taste of the level of sophistication of the razor sharp reasoning included in this packet.  Apparently, governments and unions are viewed singularly for purposes of, well, simplicity?:

Yes, the mobility of labor.  Oh, you can't relocate to Bangladesh and work for 30 cents an hour to make those jeans you like so much?  Well, I guess you will just have to stay in the U. S. and take advantage of that mandated benefit of minimum wage, at least until such socialist policies bankrupt our economy.  Then what will you do? Huh? Huh?

So you see, then, that any attempt at "fairness," you social justice pinkos, is really an attempt by socialist government elites (in Brussels and Washington) to take over more control and add more costs to your bologna sandwich.  "Overspecifying and enforcing" Wall Street or Koch Industries or BP?  Recipe for corruption, abuse of power, subservience and stagnation.  Let the free market roll!

History lessons:  Coolidge and Harding, good because they cut taxes.  Hoover, bad--way too liberal for the Kochs--he raised taxes: 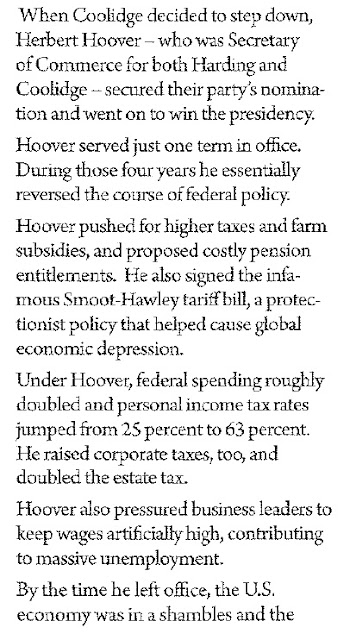 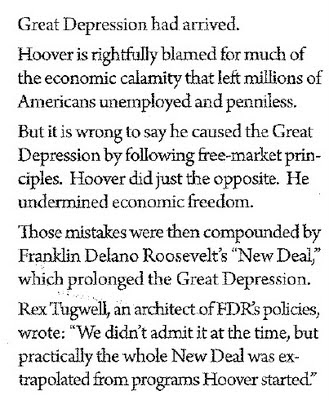 So you see, boys and girls, it was Hoover's statist policies that caused the Great Depression, and it had nothing to do with the "free-market" casino capitalism, money gorging, and corruption that brought down the Stock Market in 1929 (see 2008).  And don't forget that even though Hoover started the Great Depression with his liberal policies, it was Roosevelt who kept it going.

Why the American people elected him four times will be taken up, no doubt, in the next installment of the World According to the Kochs.  Stay tuned.
at 4:24 PM