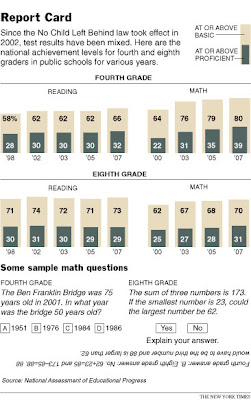 The corporate media is already in action, printing the press releases handed them by the dissemblers in charge of handing them out from Education Department. "Test scores at all time high" the headlines scream. Yes, true, but this has happened many times over the past thirty five years, as NAEP test scores have generally trended upward since NAEP began.

What none of the Spellings spinners will talk about is the fact that growth in scores has slowed since NCLB as compared to growth before NCLB. The best media report I've seen so far is from the NY Times, and it is has its weaknesses.

Here's the straight dope from FairTest:

“NO CHILD LEFT BEHIND” HAS NOT LED TO FASTER SCHOOL IMPROVEMENT

Bush Administration claims about the controversial “No Child Left Behind” (NCLB) law are undermined by data from its own Department of Education, according to an analysis of newly released National Assessment of Education Progress (NAEP) scores by the National Center for Fair & Open Testing (FairTest). “NAEP shows educational improvement across the nation slowed significantly since NCLB went into effect,” said FairTest co-Executive Director Monty Neill. “This happened despite the fact that curriculum narrowed in many schools to little more than test preparation in reading and math”

“Gains from 2000 to 2003, before NCLB went into effect, were significantly greater than they were from 2003 to 2007, when NCLB was the law,” Neill continued. “That deflates the administration’s claims that federal law is driving school improvement. For example, black students’ 4th grade math scores jumped from 203 to 216 in the three years before NCLB took effect, then edged up to 222 from 2003 to 2007.”

- “[Mathematics] gains made since 2003 are . . . not as large as those realized during some earlier period.”

“The administration continues to cherry-pick test scores to defend its deeply flawed education policy,” said Neill. “There are much better ways to improve educational quality and equity. Congress should listen to the more than 140 national education, civil rights and religious organizations that have come together to call for an overall of this damaging federal law."

The multi-organizational statement calling for an overhaul of “No Child Left Behind” and other assessment reform materials are available at http://www.fairtest.org

Black, white and Hispanics scores all are identical to 2002.

The black-white gap in reading is same as in 2002 (27 points) and is one point wider than in '98 - AND scores did not rise at a statistically signifcant level since '98 - 1 point for blacks, 2 points for whites.

Scores for whites and Hispanics are unchanged since 2002; but the gap then was reported as 26 points, while this year it is reported as 25 points. Scores for both groups have inched up a few points since '94, but the gap then was 24 points. The gap was 26 points in '92. Gains since '92 have been 5 points for whites and 6 points for Hispanics. At this rate, equity will never be attained and 'proficiency' will be reached in which century?