Back on the KeyTrain Gang 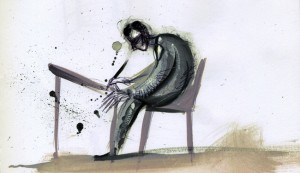 At The Common Errant, I have frequently offered detailed reports on the fraudulent nature of the corporate reforms in "education."  Shining a bright light (unfortunately lacking the sterilizing power of the sun) on human malfeasance and corruption is a worthy endeavor if, in the end, it is only a human truth in the age characterized by mechanical tyranny and bureaucratic death squads.  It is our current "ground of being." It is because of this that I have come to feel a futility in opposition.  But...

Saying NO to the technological horror so mindlessly accepted and promulgated as a kind of pinnacled position on the mountain range of history has become my only mantra, my only truth. The Indiana Department of Education is only another in a long line of organizations typified by state and corporate collusion to the benefit of a small cadre of private interests; only another pushing dominance by technological systems.  A recent "guide" to restricting collective bargaining ("Permissible and Impermissible Subjects of Collective Bargaining") sent out to state Superintendents--handmaidens to state coercion--puts the "future" succinctly enough.


The obligation to educate children and the methods by which the education is effected will change rapidly with: (i) increasing technology; (ii) the needs of an advancing civilization; and (iii) requirements for substantial educational innovation.

I don't really know what any of those really mean other than that they are a kind of cart-leading-horse philosophy: methods are changing because the effects are being named causes in the techno-loop.


An innovation is only a presentation of "newness" without the corresponding heft of difference (that makes a difference) or alteration that might be cognate with change.  "New" products are old products in "innovative" packaging/designs. This to me makes it very clear that the only thing that publication [a Melvillian slip as I meant "public education] can be "good for" is market innovations in selling educational products.  And that, at least as it is being sold today, is the clear idea behind reforms. But who cares?  No one really, right?

Teachers do because it's altering their world for the worse.   They are being "innovated" into subservient status as they become simply industrial line workers managing how the computers and software programs "design" the next generation of human resources. We are in great and drastic need of more subversiveness if we intend to return to our human origins and eschew the future of science fiction horrors.

I don't think I've ever read a utopian scenario that cannot with a bare minimum of "twist" become dystopian. The Powers among us are building a dystopia for us which they surely believe is a "utopia" for the humans who really matter and who will "save the world" for those humans, the rest be damned as "collateral damage."  (Is it odd or simply "fact" that Hollywood told us this truth in their "2012" movie where only the wealthy and the political are saved?  Does its fictional movie presentation make it something we don't believe because movies "aren't real"?)

My local newspaper has reported that the public school system in Gary, Indiana laid off 170 teachers.  Should these educators try to find other public education work?  Nope, there won't be any.  But they can start their own school.  And why shouldn't they? Today also our paper reported that after a child graduates from high school (no longer a child one supposes) they will still be subjected to the domineering infantilization of those who administer a "testing" economy.   Apparently companies now require potential employees to take standardized tests created and administered by WorkKeys.

This horrible company also offers training, natch, called KeyTrain.  It's all about getting credentialed but in reality "credentials" have no meaning, they are just another economy...just another education market.  This bright idea comes to you from the American College Testing Program, ACT.  Hey, assessment companies need to GROW, too.  You see the problem is one of capital economy--it makes stupid, coercive, manipulative, degrading ideas into our future world by sheer force of profit motive.

Why go to high school, right?  You can just take KeyTrain courses and then take WorkKeys tests and get credentialed.  Done.  Is that the future of labor?  The future of education? Destroy public education (no profit in it!): insert prison system education; insert job training education; insert appropriate credential up your...well, you get the idea. What manner of creature be this?  No longer human, is the only answer I can offer. But as a being with the ability to say "no"--I can make Bartleby my tutelary divinity and respond to these requirements and demands, "I would prefer not to."

If you will say this, too, then perhaps we can "build therefore our own world" beholden to our agreed upon needs and not those sprung from the thoughtless and impetuous designs of mindless profit-grubbing minions serving an economic and political idea created to preserve and concentrate wealth and power.
at 9:17 PM