Randi Weingarten is in Philadelphia, pretending to put herself in between the closing of 23 schools and the opening of a new batch of corporate welfare charter schools to replace them.  Below is her staged arrest.  Seems pretty calm there, Randi.


Now when you go on the AFT website and start to look at the charter-friendly historical revisionism that Randi's lawyer chums have put together there for teacher consumption, it is hard to see why Randi would be in Philadelphia getting her arrested to stop the spread of charter schools, which she obviously embraces.  From AFT's website:

In a landmark address in 1988, former AFT president Albert Shanker became one of the first education leaders to champion the concept of charter schools. Shanker envisioned teacher-led laboratories of reform that would experiment with new instructional practices. These practices would then be subjected to rigorous evaluation and, if successful, would serve as models for other public schools.

Shanker also saw charter schools as a way to empower teachers, free them from overly bureaucratic regulations, and strengthen their voice in school and curriculum decision-making. In his view, unions were essential to charter schools, because unions help create the kind of secure work environment that encourages innovation and risk-taking.

This kind of half-truth could have been written by Joel Klein or Chris Cerf or Michelle Rhee--it's exactly the same strategy they use to pretend that Shanker was a lifelong supporter of charters.   That Weingarten would use the same strategy says everything about the kind of teacher mis-leader she is and has been since she sold her soul to devil named Bloomberg.

And so the AFT history above sounds like Shanker was a proponent of charters, yes? Jersey Jazzman has documented Shanker's change in position in 1993, when Shanker came to see that the reform schoolers had embraced charters as the alternate route to school corporatization.

This happens to be written by Shanker's widow, Edith Shanker, in response to a Weingarten Klein re-writing of history in 2011:

A few months ago, in the Wall Street Journal (WSJ), Joel Klein invoked Al Shanker’s name as an educator in support of today’s charter school “reform” efforts. Klein wanted the public to believe that Al was the originator of the charter school concept (he wasn’t) and that he would today be supportive of the charter school ”reform” ideology now being spread around New York City and the country as a panacea for low student achievement. Conveniently, Klein did not indicate that Al denounced the idea of charters when it became clear that the concept had changed and was being hijacked by corporate and business interests. In Al’s view, such hijacking would result in the privatization of public education and, ultimately, its destruction – all without improving student outcomes.

Will Randi clean up her charter-friendly website when she gets out of jail for protesting the mass charter conversion in Philadelphia?  Only her lawyers know for sure.

The quicker that teachers boot her out and replace her with a child and teacher advocate, the sooner the destruction of the profession can be halted. Sweet photo below from 2009-2010 Annual Broad Report (l to r-Broad, Spellings, Klein, Weingarten). Click to enlarge. 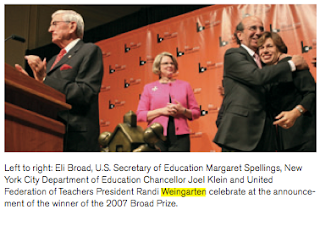 Full discloure: I am a member of AFT.