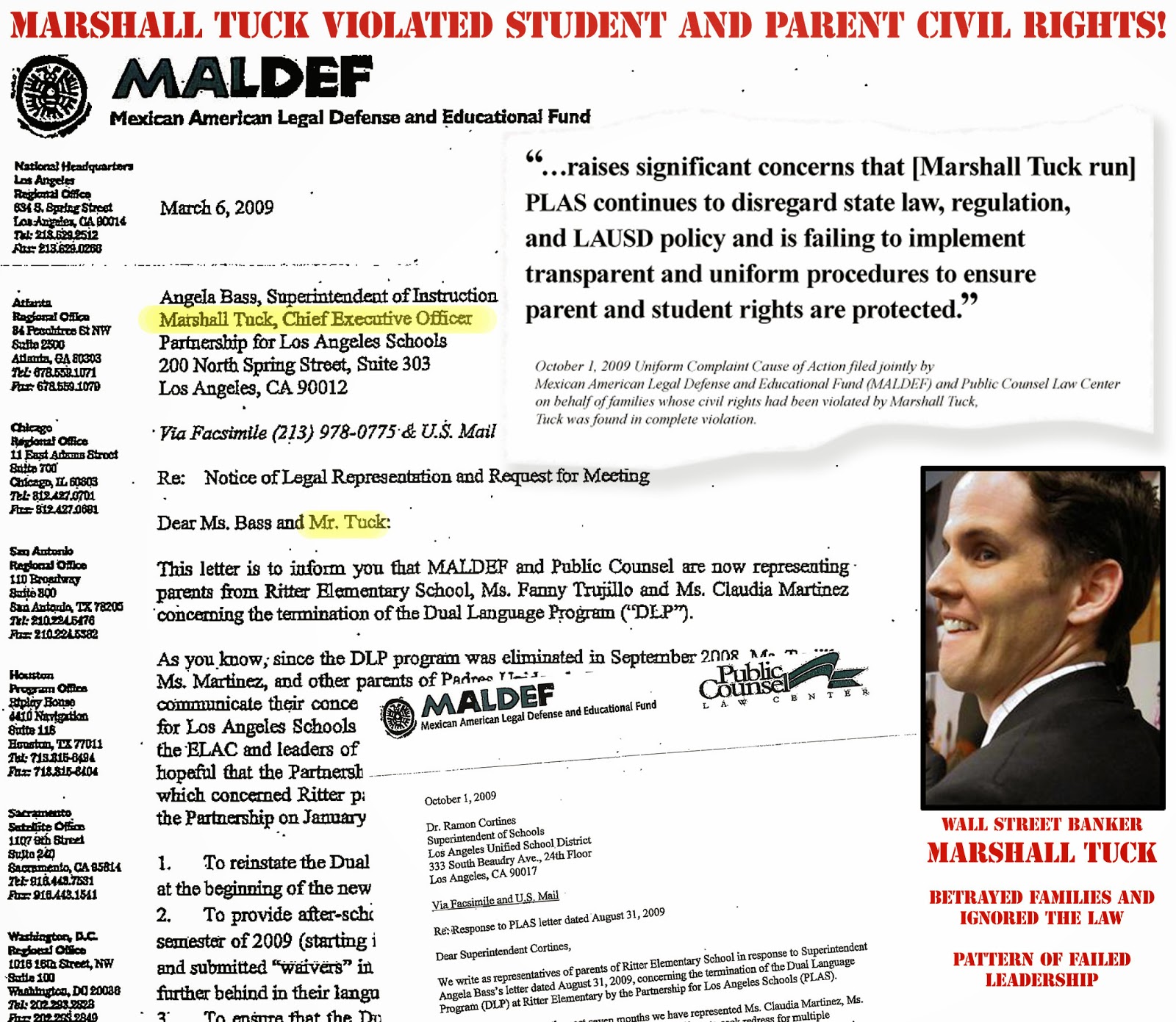 Those of us who have had the great misfortune of watching Eli Broad's protegé, Wall Street Banker Marshall Tuck, operating in Los Angeles over the years have witnessed numerous nefarious activities. From Tuck's thinly veiled white supremacy, to his cutting of vital health education classes, to his gutting ethnic studies, to his overall failure as an administrator, no reasonable person would ever support Tuck, if they were aware of his actual record. Unfortunately the corporate media have had no interest in discussing what Tuck actually did rather than what he says he did. If the media were doing their jobs, there were plenty of things that they could have done some investigative reporting on. In addition to Tuck's corporate, top-down management, there were persistant rumors of California Education Code violations, civil rights violation, and more, but we had difficulty finding people willing to come forward.

Back in July, a high profile bilingual education activist sent the following to a group of us.

I know that LAUSD and PLAS, under the leadership of Marshall Tuck, had a Uniform Complaint filed against them in 2009 for their actions at Ritter Elementary School. The complaint, on behalf of the parents, was filed by the Office of the Public Counsel (OPC) in conjunction with MALDEF. The complaint was upheld, remedies were directed, but no change of procedures or actions ever took place. How can I track down the UC? Do you think I should contact the OPC and the lawyer I was working with on behalf of the parents of the students in their now defunct Dual Language Program? Any advice would be appreciated.

The last few months have seen us encounter myriad dead ends trying to obtain documentation of the successful Uniform Complaint, but once we finally got copies last weekend, it became obvious why people have been trying to hide it. The Uniform Complaint Cause of Action filed jointly by Mexican American Legal Defense and Educational Fund (MALDEF) and Public Counsel Law Center on behalf of families whose civil rights had been violated by Marshall Tuck is perhaps the most damning documents I've ever seen. United Teachers of Los Angeles' Cheryl Ortega has already written a piece: Marshall Tuck Betrays Latino and African American Parents, that outlines the history, background, and details surrounding this tragedy at Ritter Elementary School. Therefore, I want to look at some of the more salient points in the Uniform Complaint against Tuck.

A. Failure to Provide Notice of Placement in an English Immersion Program

B. Failure to Notify Parents of Their Right to Apply for a Parental Exception Waiver.

The attorneys outline how Marshall Tuck and PLAS ignored the California Education Code. I love how the section ends with: "...violated the parents' rights under California law."

C. Failure to Form an Alternative Language Class When 20 Waivers in a Given Grade Have Been Provided.

MALDEF and Public Counsel show unequivocal evidence that Marshall Tuck failed to adhere to the provisions of the California Education Code.

D. Failure to Provide Required Response to Waivers, to Assess Each Waiver on Its Individual Merits, or to Provide Notice of the Right to Appeal if the Waiver is Denied.

Citing numerous violations of the California Education Code, Proposition 227, and other state laws, the lawyers take Marshall Tuck and his corporate team to task for blatant law breaking. Tuck, as demonstrated above, would eliminate any program that he believed was interfering with preparation for standardized tests. Students weren't important, their test scores were. Like all neoliberal corporate education reformers, PLAS and Tuck were entirely ignorant on pedagogy. The Uniform Complaint's answer to PLAS's insistence that Dual Language Programs hurt test scores is instructive:

PLAS's response that the existing program at Ritter Elementary was not producing the desired results is insufficient. There is ample evidence in LAUSD and statewide that Dual Language Programs, when implemented by a competent school-site team, not only produce far superior results in terms of academic achievement for all participating children but result in children who can speak and write in two languages, a clear assest in our world economy, and who may also have better appreciation of cultural and linguistic differences. It was PLAS's responsibility, in keeping with its goal of creating an excellent school, to create an excellent DLP, not to abolish the existing program.

As the Uniform Complaint document segues into the section that outlines Marshall Tuck and PLAS's ongoing violations, there's one more passage that I want to reproduce. Bear in mind that these events had been going on for over a year, and that both PLAS's executive team, headed by Chief Executive Officer Marshall Tuck, and PLAS's unelected Board of Directors had been entirely intransigent and uncooperative for that entire duration. The community, parents (and their lawyers), teachers, and everyone else tried to work in good faith with PLAS, but that good faith was not reciprocated.

Public Counsel and MALDEF expected that this year PLS would make every effort to ensure it followed state law, regulation and LAUSD policy consistently and uniformly. This appears not to have happened.

Please read the entire document to get and idea of how egregious Marshall Tuck and his cabal really were. The opening quote of this essay, reproduced from page one of the Uniform Complaint, shows exasperation with Tuck's lawlessness. Ironically, Tuck's entire campaign has centered around the abject lawsuit filed by reactionary millionaire David F. Welch. The Welch suit was designed to strip teachers of their bare modicum of protections they currently have, including their small degree of academic freedom. The suit, which used students who for the most part weren't even public school students, is being appealed, and hopefully will be overturned in its entirety. Tuck is quick to talk about the rights of students, but as it has been demonstrated, he methodically violated the civil rights of both his students and their parents on an ongoing basis.

The cretinous GOP candidate for California, a banker just like Tuck, keeps insisting (with no substantive evidence) that "Jerry Brown is betraying the children of California." Perhaps he's alluding to the two charter schools Brown has ties to. But here we have a clear, unequivocally documented case of multiple betrayals, deceptions, and malfeasance by another candidate for a different office: