There was a time when American expansionism around the world was wrapped in the thin rhetorical veil of democratic empowerment, but that was back then, before the Soviets dispensed with their socialist facade to openly embrace the American model of unrestrained greed and corruption.  This move was liberating for both Russian and American oligarchs, in that the pretense could be dropped and worldwide corporate fascism could be fully unleashed under the new banner of "globalisation."

Bill and Hillary Clinton have taken full advantage of the new alignment of world dollar power to stuff their own pockets and to spread their patronizing brand of neoliberal social welfare, whose principal beneficiaries are the oligarchs to whom they owe their public faces.

A week or so back, Bill Clinton showed up unannounced to inspire a hundred of the biggest corporate whales from around the world with more of his dissembling, lip-biting and gravelly emotionalism. The new target for venture philanthropy is the international education market, and this time, instead of textbooks inspired by the US State Department propagandists, this crusade is grounded in the new corporate paternalism aimed to produce passive, well trained drones willing to do whatever their corporate bosses require--even if means the end of human civilization.

The lead organization, it seems, in the new effort to increase corporate "giving" from 7 to 20 percent is Business Backs Education, an outfit ostensibly based in the Middle East with a few brown faces to front for a whole pack of white men running the show.


. . . This campaign, Business Backs Education, is intended to help close a $26bn (£16bn) annual funding gap needed to provide a school place for all primary-age children.

It wants businesses to spend 20% of their corporate social responsibility (CSR) budgets on education by 2020.

"Business can and should play a much greater role," in both the developed and developing world, says Vikas Pota, convener of the Global Education and Skills Forum and chief executive of the Varkey Gems Foundation. . . .

Here is the kind of dissembling bullshit that Clinton brought to inspire the oligarchs:


"If you're going to get into education, I think it's really important that you invest in what works," Clinton said. "For example, New Orleans has better schools than it had before Hurricane Katrina, and it's the only public school [district] in America where 100 percent of the schools are charter schools."

If you want to know the real story of New Orleans, have a look here at a Buras article from 2011.  Below is a chart (click to enlarge) from that piece that depicts the interwoven clustering of corporate profiteers, corporate welfare kings and queens, and the corrupt political machine that keeps it afloat. 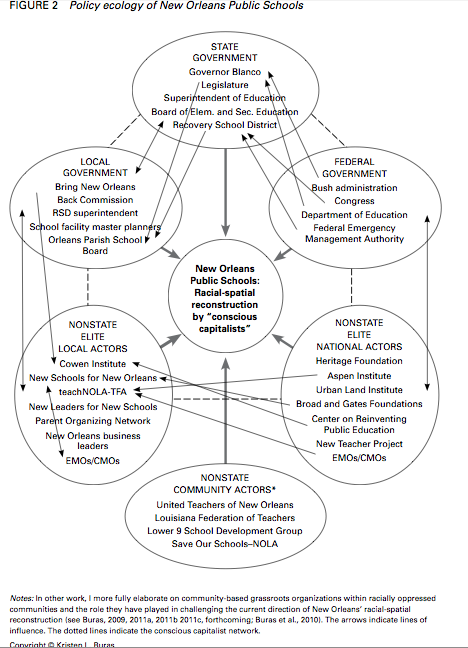