For those who have denied the danger that Diane Ravitch represents to the testing resistance  movement, have a look at this latest attempt to garner support for Weingarten's latest efforts to keep alive the maggot-infested body of Common Core.


Despite the efforts of the Gates Foundation and others to treat the Common Core standards as an iron-clad document, as tablets chiseled in stone, which may be added to but never changed, the American Federation of Teachers has awarded grants to its affiliates in New York and Connecticut to review, and where necessary, rewrite the standards. The same thing could happen in every state where teachers have concluded that the CC standards are developmentally inappropriate, misaligned with the needs of children with disabilities, or suffer from other defects. This move on the part of the AFT both bolsters the chances of CC to survive and undercuts  its ability to be considered “national standards,” since teachers in every state will see different ways to revise them. Teachers will determine whether the standards need revision or whether the implementation was problematic. Let the revisions begin! 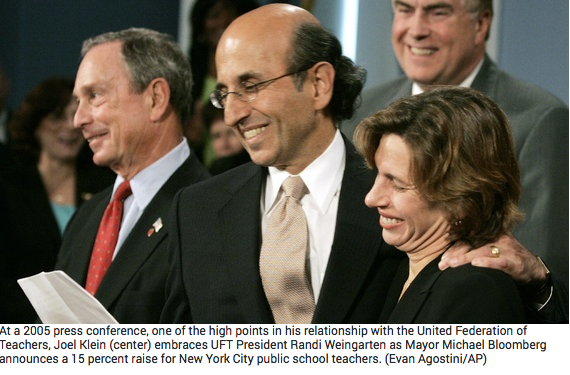 First, Ravitch assumes that everyone agrees with her, Weingarten, and CorpEd in thinking that one set of standards and one curriculum for the nation are good ideas, and all that CC requires is some "reviewing" and maybe some re-writing "where necessary."

Thinking people resent this, just as they resent the whole idea of monoculture that is bred by the insistence on having a unitary approach to knowledge and understanding.  We need diversity of thought in order to respect our differences and to solve our common problems, rather than everyone on the same page at the same time of day in the same textbook, from Buffalo to Biloxi.

Secondly, Ravitch assumes that because Weingarten has spent a few thousand dollars to lubricate two AFT subsidiaries (both corrupt) with dirty money provided by the oligarchs for "innovation grants," then the rest of the AFT and NEA world will follow suit, and that a thousand different versions of Common Core will come to bloom.

As long as there is a Common Core, there will be a common set of national standards, and tests to go with them, notwithstanding Ravitch's spin.  Is she really this naive or deluded to believe that teachers will, 1) trust Rhonda Weingarten, 2) be assuaged by some foggy notion of a some-day chance to review and/or revise something not worth revising, and 3) cease and desist in a growing rebellion against standardized testing, standardized curriculum, and standardized corporate thinking?

Thirdly, Ravitch assumes that, without any melting of Hell, teachers voices will suddenly be heard.  Does she have some insider knowledge that would change the entire course of education reform history, since it has never been the case in the past been that corporate-federal policymakers have paid any attention to what teachers think.  Talk about magical realism!

Fourthly, Ravitch assumes that because she says it okay for Weingarten to use Broad pocket change to try to bribe teachers, then it must be okay.  After all, Ravitch said so.

The level of hubris and delusional arrogance that comes with these pronouncements leads me to think that something is not right.  Badly not right.  We know that Ravitch has been building a containment vessel for the resistance since she and Cody started their "Network," getting almost everyone in the resistance to sign on.  I guess it was inevitable that cards be put on the table at some point.