Chicago Tribune Columnist Calls for a Katrina in Chicago

First it was an elitist fool on the NOLA school board, Phyllis Landrieu, who thanked God for Katrina, and then in 2010 it was Obama's robot, Arne Duncan, who expressed the same gratitude for a blessing that killed over 1,800 people and permanently marred the lives of hundreds of thousands of others.

Now five years later another jaded corporate jackass has stepped forward to utter the same preposterous nonsense all over again, this time in what remains of the Chicago Tribune.  Not only does Kristen McQueary wax poetic on the destruction of New Orleans, but she calls for the same kind of devastation in Chicago, in order to kill off public schools and the Chicago Teachers Union so that the a corporate welfare education model might rise from the water-logged remains as it did in New Orleans:


I find myself wishing for a storm in Chicago — an unpredictable, haughty, devastating swirl of fury. A dramatic levee break. Geysers bursting through manhole covers. A sleeping city, forced onto the rooftops.

That's what it took to hit the reset button in New Orleans. Chaos. Tragedy. Heartbreak.

As Erich Fromm noted, the necrophile prefers to kill what she cannot control, thus preferring death and mechanical manipulation to life and organic growth.  What a perfect example of this psychopathology in action.

By the way, don't look for this at the Tribune's website--it has been scrubbed.  Thanks to HuffPo for saving the page.  Click to enlarge. 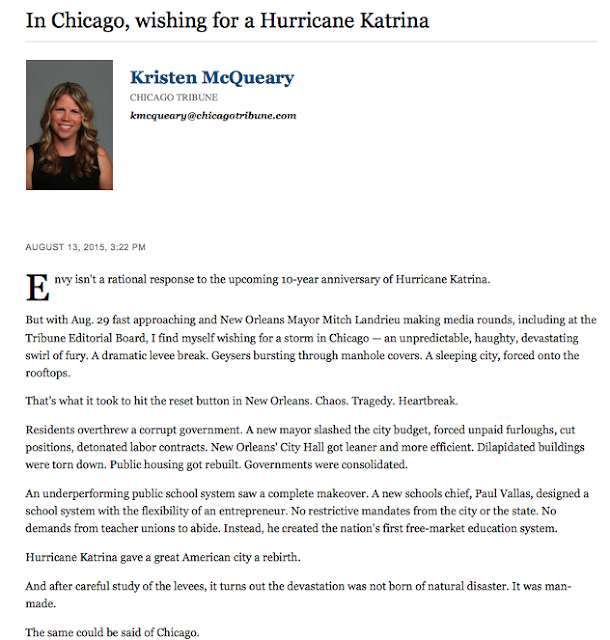