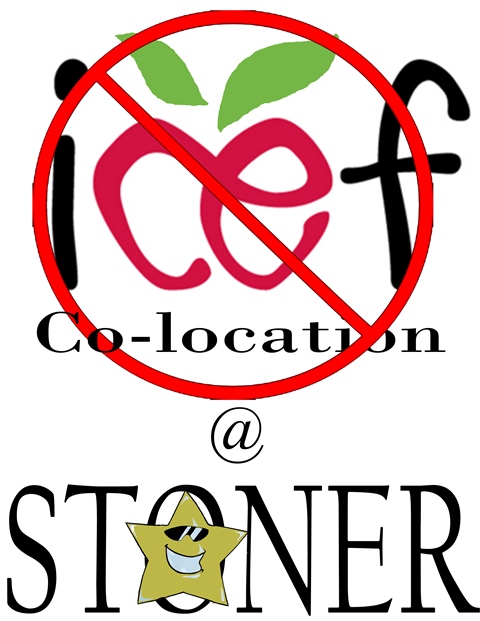 FOR IMMEDIATE RELEASE
On Monday, August 17, 2015, the first day of school, from 7:30-8:30AM, the Stoner Elementary School Community and local Del Rey neighborhood will be holding a protest against the co-location of ICEF Vista Charter School on the Stoner ES campus. Stoners parents are upset that the co-location has taken resource rooms including: music, special education, and language therapy among others. Local residents are upset because the co-location will bring traffic and safety issues to their neighborhood.

WHAT: Stoner Elementary Community is holding a:
RALLY TO SUPPORT STONER ELEMENTARY AND OPPOSE THE CO-LOCATION
WHEN: Monday, August 17, 2015 at 7:30 – 8:30 AM
WHERE: on the corner of Stoner Avenue and Lindblade Street, 90230.
[map]

Media is invited to attend.

Most importantly, there will be calls for better schools, a safer neighborhood, and unity in the community.

ICEF Vista Elementary, a neighboring school that is located two blocks from Stoner on the campus of the defunct St. Gerard Majella Elementary School, has taken classroom space at Stoner.  To many people in the neighborhood, ICEF is seen as ‘the school at the church’ and many ICEF families take pride that their school provides benefit to the local parish.  However, ICEF wants to expand and that means leaving the church grounds. Part of ICEF’s expansion plan includes co-locating at another campus to open up space at the St. Gerard campus.

ICEF is “stealing from Peter to Give to Paul”

Stoner ES parents are outraged that ICEF Vista’s will be co-locating this year and has taken set aside rooms that are used for music, art, parents center, and computer lab at Stoner so that ICEF can open up space on the St. Gerard campus to have room for an art room, parents center and computer lab.  ICEF is literally taking away resources from Stoner ES to give those same resources to the ‘school at the church.’

In February 2014 when the proposed co-location was announced, Stoner community leaders addressed the ICEF board and asked them to reconsider their co-location plans.    In March 2014, Stoner families and local residents sent over a hundred letters and emails to ICEF and LAUSD Boards urging them to not have the co-location at Stoner.  In April 2014, when a final offer was made for the co-location, the Stoner and local community held a protest in front of the ICEF Vista campus urging them to not co-locate.

The Stoner and local community will be holding a protest on the morning of the first day of school Monday August 17 to let ICEF families know about our concerns with the co-location. More protests are planned for later in this school year.

WHAT DO WE WANT:

We want to let the ICEF community know the damage this co-location is causing and the harm it is bring to our community children. The Stoner parents are asking family of ICEF Vista to not support the co-location by selecting another educational option. We are encouraging the families of the 20 ICEF students who pertain to Stoner to consider sending their children to their local community school. We are asking parents from outside the area to consider their local schools or choose a non-colocated charter.