Why Have Some Civil Rights Groups Flipped on Standardized Testing? 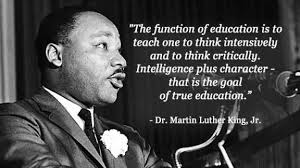 In 1947, as a student at Morehouse College, an eighteen-year old Martin Luther King, Jr. wrote an article for the student newspaper The Maroon Tiger. In the article, The Purpose of Education, he explained his vision of what education should be. He said education should not be about equipping students “with the proper instruments of exploitation so that they can forever trample over the masses”. He continued, education must also be about more than training for a career, stating,

“Education must also train one for quick, resolute and effective thinking. To think incisively and to think for one's self is very difficult. We are prone to let our mental life become invaded by legions of half truths, prejudices, and propaganda. At this point, I often wonder whether or not education is fulfilling its purpose. A great majority of the so-called educated people do not think logically and scientifically. Even the press, the classroom, the platform, and the pulpit in many instances do not give us objective and unbiased truths. To save man from the morass of propaganda, in my opinion, is one of the chief aims of education. Education must enable one to sift and weigh evidence, to discern the true from the false, the real from the unreal, and the facts from the fiction.”
_______________

On October 28, 2014, eleven civil rights groups sent a letter to President Obama and Education Secretary Arne Duncan urging them to drop the test based K-12 ‘accountability’ system. In it they state,

“While the need for accountability is almost universally agreed upon, there have been concerns raised about overly punitive accountability systems that do not take into account the resources, geography, student population, and needs of specific schools. In particular, the No Child Left Behind law has not accomplished its intended goals of substantially expanding educational equity or significantly improving educational outcomes. Racial achievement and opportunity gaps remain large, and many struggling school systems have made little progress under rules that emphasize testing without investing. We must shift towards accountability strategies that promote equity and strengthen, rather than weaken, schools in our communities, so that they can better serve students and accelerate student success.”

The letter goes on to list eight recommendations – none of which call for high stakes testing.

The organizations signing the letter were:

On May 5, 2015, twelve civil rights organizations, including some of those listed above issued a press release opposing opting-out of standardized tests. In it they state,

“Standardized tests, as ‘high stakes tests,’ have been misused over time to deny opportunity and undermine the educational purpose of schools, actions we have never supported and will never condone.  But the anti-testing efforts that appear to be growing in states across the nation, like in Colorado and New York, would sabotage important data and rob us of the right to know how our students are faring. When parents ‘opt out’ of tests—even when out of protest for legitimate concerns—they’re not only making a choice for their own child, they’re inadvertently making a choice to undermine efforts to improve schools for every child.”

The organizations signing the press release were:

The organizations that signed both documents are marked with an asterisk.

That standardized tests are needed for funding decisions is a bogus claim. Community income levels should determine the needs of a school. Torturing students for hours with tests that have nothing to do with diagnosis or remediation of student learning deficits are not going to bring equity in education. Quite the opposite!

Under corporate education reform, which is a full-scale assault on public education, standardized tests are used to rank teachers and schools for the purpose of closing schools or doing a “turnaround” from a public to a charter school. The ultimate purpose of these tests is to advance a privatization agenda that affects low-income communities the hardest.

So why would these organizations, some of the largest civil rights organizations in the United States, jointly agree to do a one-eighty on standardized testing in just a few months?

On May 9, 2015, Wayne Au, associate professor in the School of Educational Studies at the University of Washington Bothell, and an editor for the social justice teaching magazine Rethinking Schools, had a column in the Washington Post, “Just whose rights do these civil rights groups think they are protecting?”

“We cannot, of course, say that these groups came to the defense of high-stakes, standardized testing at the behest of the Gates Foundation, but we should be clear that their politics align with that of the Gates Foundation, and so the fact that these particular civil rights organizations came out in force to support a central reform backed by the foundation should come as no surprise to anyone.”

Au found the following funding of these organizations by the Gates Foundation:

According to Making Change At Walmart, Walmart is the largest single employer of African Americans in the country (20 percent of the 1.3 million total employees), pays employees an average of $8.81 an hour, and under Walmart’s definition of full-time work, an employee would only earn 65 percent of the 2014 federal poverty rate for a family of four. According to a brief by the Economic Policy Institute, the Walton Family’s total wealth equals that of 79 percent of the combined wealth of all African American families (or almost 78 percent of the combined wealth of all Latino families).

That two major leaders of corporate education reform have targeted civil rights organizations for “philanthropy” is no accident. It allows them to carry out their neoliberal stealth campaign giving their funding a progressive veneer, while actually targeting low-income communities as the most vulnerable for advancing their privatization agenda.
The Walton Foundation has been especially involved with the Black Alliance for Educational Opportunity in advancing the privatization agenda among civil rights organizations. Milwaukee-based BAEO is a promoter of charter schools and vouchers in urban areas all over the country. Founder Howard Fuller has said, “We wouldn’t exist without John Walton and this is one of the reasons I love that man.” See Corporate Education Reform and Civil Rights | Defend Public Education!

The National Urban League, at its recent national convention, gave Jeb Bush the platform to promote charter schools and the tax-credit voucher program which he pioneered while he was governor of Florida. In the August 6, 2015 GOP debate Bush advanced his support of Common Core, taking a states rights position that each state should have its own version of Common Core. This is to bring him in line with Congressional Republicans who are promoting the ALEC states rights position in the current Congressional Conference on the ESEA rewrite.

On the day of the GOP debate, Daniel Pfeiffer, a former senior advisor to President Obama for strategy and communications, tweeted that the White House was grateful to Jeb Bush for helping to promote Common Core. Probably meant in jest, it nevertheless shows the coming together of constituents from the two parties for the common goal of advancing the privatization of public education.

For their part, neoliberal Congressional Democrats continue to promote the goals of the Murphy Amendment in the Conference Committee that had been rejected in the Senate version of the ESEA rewrite. All but two Democrats voted for this doubling down of No Child Left Behind that would expand the role of testing in school and teacher evaluations. It was voted down because Senate Republicans saw it as an expansion of the federal role in education. Teacher blogger Mercedes Schneider describes the Murphy Amendment goal this way:


“Senator Murphy’s (D-CT) amendment 2241 (which Warren co-sponsored) went up for a vote and was rejected 43-54. The 12-page text of Murphy’s SA 2241 reads more like No Child Left Behind (NCLB), with its detailed prescription for reporting on student test results, for “meaningfully differentiating among all public schools” (i.e., grading schools), including publicly identifying the lowest five percent, and, among interventions, potentially firing staff and offering students the option to transfer to other schools and using part of the budget to pay for the transportation.

This amendment would have enacted tough, federal-mandated accountability, akin to setting up an “achievement school district” in every state.”

This will be a major goal of neoliberal Democrats when the Conference Committee resumes deliberations after a five-week summer break in September.

The bill’s lead sponsor, Senator Chris Murphy (D-CT), said rejection of expansion of testing would “return the country to the days when states and school districts could ignore achievement gaps and allow poor, minority and disabled children to languish.”

American Federation of Teachers President Randi Weingarten, on a panel at the Network for Public Education, on April 26, 2015 said, (47:00 in the linked video)

“The civil rights community and the President of the United States of America is fighting very hard to have annual tests for one purpose. They have seen in states for years, that if they didn’t have them that states would ignore children.”

The National Education Association, on the other hand, is against the Murphy Amendment because it “would result in an over-identification of failing schools, repeating a key problem with No Child Left Behind.” The union was attacked by the Gates funded Education Trust (see Education Trust: Profoundly Gates-funded, Test-driven-reform Machine by Mercedes Schneider) for its position. Its President, Kati Haycock, accused the NEA of working to protect suburban schools that perform well on average, but not “gritty urban districts” whom she claims need standardized tests to be funded.

U.S. Secretary of Education Arne Duncan has been notorious for using waivers from the NCLB requirements to whip states desperate for federal funding into line. The Race to the Top program uses a carrot-and-stick approach for advancing the neoliberal privatization agenda.

How can public education and democracy itself survive when the interests of profit are put above the common good?

What would Martin Luther King do?

This is what he said at the close of The Purpose of Education,

“We must remember that intelligence is not enough. Intelligence plus character--that is the goal of true education. The complete education gives one not only power of concentration, but worthy objectives upon which to concentrate. The broad education will, therefore, transmit to one not only the accumulated knowledge of the race but also the accumulated experience of social living.

If we are not careful, our colleges will produce a group of close-minded, unscientific, illogical propagandists, consumed with immoral acts. Be careful, ‘brethren!’ Be careful, teachers!”

National Resolution on High-Stakes Testing | Time Out From Testing
As of this writing, 623 organizations and 19,691 individuals have signed a resolution to the Obama Administration and Congress calling for the “overhaul the Elementary and Secondary Education Act, currently known as the "No Child Left Behind Act," reduce the testing mandates, promote multiple forms of evidence of student learning and school quality in accountability, and not mandate any fixed role for the use of student test scores in evaluating educators.” The Real News

The Betrayal by the Black Elite with Chris Hedges and Cornel West
The Real News – August 11, 2015