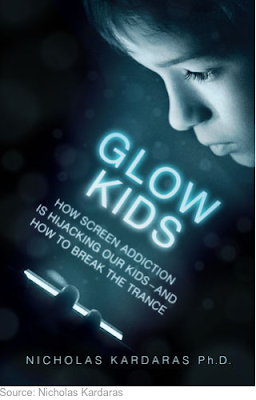 If you are a reluctant teacher or parent now being inundated with reasons you should embrace more computer screen time for school kids, there are good reasons for your skepticism.  Here's one:

As I discuss in my book, Glow Kids, screen tech can affect the brain just like a digital drug: Gaming raises dopamine levels by 100 percent and activates the H-P-A (the Hypothalmus-Pituatary-Adrenal Axis, otherwise known as the "fight or flight" response). Shockingly, recent brain imaging has shown that excessive gaming negatively impacts the frontal cortex—the executive functioning region of the brain which also controls impulsivity—in exactly the same way that cocaine does. This is why Peter Whybrow, head of neuroscience at the University of California, Los Angeles, calls screens "electronic cocaine" and other researchers call video games "digital heroin."

Many of us who research tech addiction and work with screen-addicted kids understand that screens can be addicting. We didn't know that they are so powerful that they can be used as digital morphine. Do you want your child digitally ingesting something that has such a powerful neurobiological effect?