Marketplace, which has a time slot on most public radio stations, had a piece last week on the replacement of a high-performing community public elementary school in Baltimore by a "no excuses" KIPP school. Most often these community wrecking ball school replacements are justified by low test scores within the targeted school, but the destruction of Langston Hughes Elementary School in Park Heights required other reasons.  Langston Hughes was a high performing community anchor, where parents knew their children would be taught by professional and caring teachers in small classes within a safe and supportive environment. 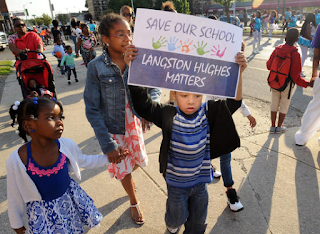 So the "under-utilized" excuse was used by the elite efficiency zealots who control public schools in Baltimore.  And even though the community had worked effectively to improve enrollment, the school choice had been made for the parents, children, and parents of Langston Hughes.  Their school would be shut down, regardless of their choice to stay open, and buses would be provided to ferry children to a KIPP school a mile away, where 26 children would be taught in a single classroom by a teacher schooled in corporate paternalism and most assuredly lacking in experience, cultural understanding, and empathy.  No Excuses.

This "school choice" story, where corporate interests push in with charter replacements and call it "choice," is never told in the media.  The sympathetic story cited above is the rare exception to the corporate charter cheerleading that has been the position of the New York Times and Washington Post for years.  See Part 17 below from Work Hard, Be Hard . . . .