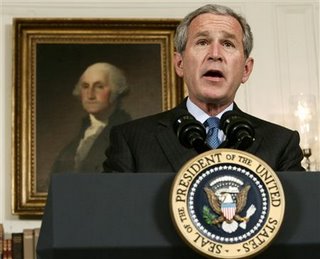 Illegal spying? What spying? Me, spy?


While BushCo. did not get the permanent tax cuts it wanted, they did get the $70 billion in cuts passed by their Congress through 2010. With another $20 billion planned for later this year, that will leave a $50 billion shortfall from the $40 billion in budget cuts from earlier this year. Remember the $11 billion cut from tuition assistance? The $15 billion that NCLBA is now short compared to what has been authorized?

And who is benefiting from the tax cuts? From Think Progress:

The top tenth of 1 percent, whose average income is $5.3 million, would save an average of $82,415. Those in the top group would see their tax bill cut 4.8 percent, while Americans at the center of the income distribution — the middle fifth of taxpayers, who will earn an average of $36,000 this year — could expect a 0.4 percent reduction in their tax bill, or about $20.