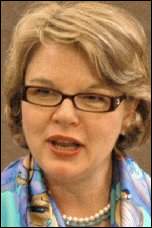 Attempting to play to both political realities, one owned by the ed industry demanding more of the billions from the ED tutoring trough, and the other from state departments of education ready to lead a mutiny against the idiotic mass transfer of students out of schools on the failing list, Spellings has reversed the order of sanctions for Year 2 and 3 of failure. Now Year 2 schools will be required to offer tutoring, and transfers will not begin until Year 3.

The big winners here, of course, are the Kaplans and Princeton Reviews and Catapults (formerly Sylvan) of the world who want to lap up this federal gravy before the Bushies are run out of town.

In other news, the Queen of Pain has announced that there were only two winners in the big contest to see which states will be allowed to experiment with "growth models" for measuring the failure of the public schools: Tennessee and North Carolina. For those who were naively hoping that there would be some significant shift in the guaranteed failure schedule, this is a clear indicator that there will be no serious reconsidertion at ED regarding the pre-ordained destination of the death march that NCLB guarantees by 2014.

The big winner here? I would say SAS and the Bill Sanders brand of value-added assessment, a proprietary algorithm that was originally developed to measure the growth of field crops and that no one can translate for the layman.

The only alternative to the federally-mandated crushing of the public schools will be to organize, lobby, vote, and get in the streets and in front of the schools. What happens in the next year will have a huge impact on the future of the Republic and whether or not we preserve its democratic aspirations or capitulate to a hardening dark core of fascism.

Any other domestic privatization scheme would not stand a chance with the weakened condition of the liars and crooks in charge of federal policy, but so few people pay attention to education issues that it is critical to make a lot of noise to get any attention to what is happening and what is planned. Once the public knows, this, too, will go the way of last privatization scam, Social Security. Get your school bell today--I expect they will be ringing in the streets of Washington in the not-so-distant future.