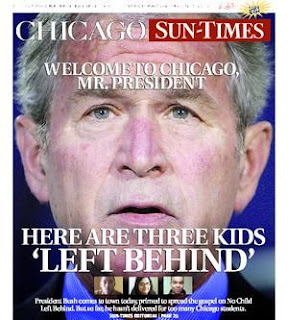 From the Chicago Sun-Times editorial:

Here are three kids 'left behind'

Bush here to tout his law; better he should see its sad impact

January 7, 2008
President Bush arrives in town today, primed to spread the gospel on one of his key policy initiatives, the No Child Left Behind Law.

The sweeping law expects all children, regardless of race, income or disability, to perform at grade level by 2014.

The goals are lofty, but the reality is jarring. We thought the president should meet some of the children in Chicago who are left behind every day, especially in our high schools.

Meet Denise Ferrusquia, a junior at Kelly High School on the Southwest Side. Many of her classes have 35 students or more.

"There are so many kids that you can't really ask questions or express your opinion so you can learn," said Denise, who hopes to be the first in her family to go to college. "I feel I have to do learning on my own."

The hallways are so packed at Kelly that it's hard to move. "It's a very hostile setting," she said. "Everyone is just angry and trying to get to class."

Denise takes mostly honors classes and is on the student council and debate team. But she fears she can't compete.

"It's not fair to compare us to other schools where it's not overcrowded," she said. "There, the teachers can focus on them more."

Brad Johnson, a recent CPS grad, didn't realize how shortchanged he had been until he arrived at Loyola University Chicago last fall.

"Professors expect me to know a lot of things, and I just don't," said Brad, a 2007 Austin High School graduate. "I thought I had study skills, but now that I'm here, it's been hard. I got straight A's [in high school] without studying."

During his sophomore year, CPS began phasing out Austin, a chronically low-performing school. Two promising replacement schools have since opened at Austin as part of a new CPS-led effort to overhaul failing high schools, but Brad paid a price for sticking it out in a dying school. He couldn't even take an advanced placement class.

Finally, Bush should hear about David Wells, who dropped out of Morgan Park High School. He accepts some responsibility but also blames the school, where he says his teachers were distant.

"When people want you to succeed, that makes you want to succeed, but if you're just sitting in the classroom and kids are talking about smoking and drinking, the focus isn't on work," David said.

David now goes to an alternative public school and is flourishing there. But seats at those schools are limited.

"NCLB doesn't do anything for the huge numbers of kids who have dropped out," said Jack Wuest, director of the Chicago Alternative Schools Network.

It has been six years since Bush signed the landmark No Child bill. Efforts to reauthorize it stalled last year, and he will likely be talking the law up today, touting its accomplishments.

Since the No Child law passed, average state test scores for high schoolers haven't budged. In fact, reading scores for minority students and for poor students are lower than in 2003, a Sun-Times analysis found. There has been meaningful progress on the ACT since 2003, but white student gains outpaced gains made by black and Hispanic students.

Those numbers won't improve, many in Chicago's trenches say, unless the law is changed to address what stands in the way: inequitable funding, overcrowding, violence, truancy and the overwhelming effects of poverty.

"If they're not willing to take these problems seriously ... then NCLB is a waste of time," said Andrew Martinek, a teacher at Gage Park High School, which saw a spike in violence after it absorbed a record number of freshmen in 2006. "They're trying to force innovation without the tools."

Bush's proposals for a reauthorized law include a nod toward some of these problems, including targeted resources for schools most in need, more funding for high schools and more rigorous coursework. But so far, neither he nor Congress has delivered.

The president has argued against "the soft bigotry of low expectations." But setting high standards -- without the requisite help to get there -- isn't any better.

The president is scheduled to meet with business leaders today at the Union League Club.

Email ThisBlogThis!Share to TwitterShare to FacebookShare to Pinterest
Labels: NCLB