Unending War Relies On Steady Supply of Dropouts and Pushouts 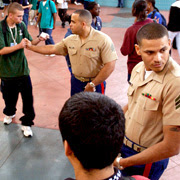 During World War I, the new racist "scientists" of human intelligence field tested their new human sorting tool that came to known as the IQ test. GIs who did poorly (the poor, the brown, and the black) on the bogus inventory were shipped off to the trenches of France, while the high flyers got Washington desk jobs.

Almost a hundred years later we use other racist tests to accomplish the same end, all the while calling it a civil rights initiative. And now WaPo reports that a third of new recruits are the great grandsons and great granddaughters of the World War I generation of poor, brown, and black citizens who did not finish school. These youngsters today have failed to make it in the testing factories we call schools, and recruiters, armed with these kids' school data (NCLB mandates it), have an unending supply of hot leads.

What would that recruiting poster look like--an army one group of dropouts and pushouts who can still contribute to the America's world class military economy. Sign your body up today!
at 8:19 AM