Squash, Anyone--anyone with $65K for Tuition? 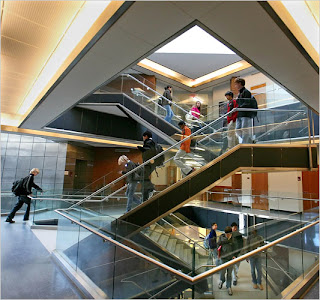 While school privatizers continue to wave the freedom flag and talk about parental choice, their rhetoric is matched by the reality of choosing charter schools in shutdown strip mall storefronts or corrugated trailers, or the choice of four to six thousand dollar vouchers to attend church schools that are, otherwise, emptying for fear of the priestly pedophiles who lurk there.

Meanwhile, the NYTimes has the story on the real school choices, the ones that are accessible to those who can afford to choose a school with a billion dollar endowment that charges from 40 to 70 thousand dollars a year for tuition.

EXETER, N.H. — When Curtis Thomas, a 14-year-old from a poor family living in St. Rose, La., arrived here two years ago to attend Phillips Exeter Academy, he brought little more than a pair of jeans and two shirts. That would hardly do at a 227-year-old prep school where ties are still required for boys in class.

So Curtis’s history teacher, armed with Exeter funds, took him shopping for a new wardrobe.

That outlay was just a tiny fraction of what Exeter spends on its students. With its small classes, computers for students receiving financial aid, lavish sports facilities and more, Exeter devotes an average of $63,500 annually to house and educate each of its 1,000 students. That is far more than the Thomas family could ever afford and well above even the $36,500 in tuition, room and board Exeter charges those paying full price.

As a result, like the best universities to which most of its students aspire, Exeter is relying more and more on its lush endowment to fill the gap.

Despite Exeter’s expanding commitments, which include a new promise to pay the full cost for any student whose family income is less than $75,000, the school’s endowment keeps growing. Last year — fueled by gifts from wealthy alumni and its own successful investments — it crossed the $1 billion mark, up from just over $500 million in 2002. . . .