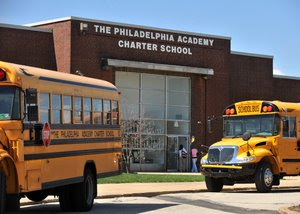 As urban children are ground up in the high-stakes testing crucible in order to justify turning over their public schools to private management (as if that is going to solve the poverty problem), the sleazy managers of these charter school stores are getting rich while the children, teachers, and parents get the shaft.

The good news in the story below is that major media like the Philadelphia Inquirer are starting to shine a light under a few of the rocks where the fat leeches hide. The bad news is that it takes persistent complaints from parents to initiate any oversight of these corporate welfare sewers:

As chief executive officer of Philadelphia Academy Charter School, Brien N. Gardiner took home a $164,500 salary in 2005-06 - more than most superintendents in the region made.

That same year, Gardiner collected an additional $60,000 as CEO of Northwood Academy, a second charter school, giving him a total salary of $224,500. The Philadelphia School District gave the schools a combined $14.6 million in taxpayer dollars to educate 1,700 students in kindergarten to 12th grade.

This fall, as Gardiner's educational empire in the Northeast grew, a small group of parents and district officials became concerned about the way Philadelphia Academy was being managed, including the hiring of administrators' family members.

They became even more alarmed when they learned that the school's board had quietly named Kevin O'Shea, a former city police officer with a high-school diploma, as CEO in 2006, and that he was drawing a salary of $206,137. Gardiner, a former district principal, is still a consultant for both schools, a school official confirmed. . . .