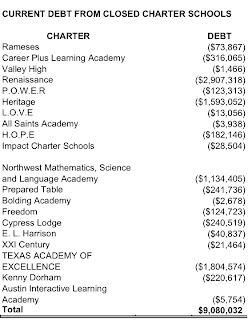 Texas has 206 charter schools, and 93 of them are in hot water for bilking the state out of millions of dollars by overcounting their enrollment. At $5,400 a pop, a few imaginary students here and few not over there, and before you know it, you've enough for a new Suburban with longhorns on the front.

In the chart here provided by the Dallas Morning News (click it to enlarge and enrage), we see that $9 million of the $23 million owed to the taxpayers is from those boarded up "academies of learning" that were intended by the Business Roundtable to be the for-profit, or non-profit/w corporate tax credits, solution to educating the poor in America. Another $14 million is owed the State by those "excellence" outfits still in operation. And if this is what the State knows about, can you imagine how much is really being stolen?

No one really knows whether the charter school debt might be more than $26 million.

TEA doesn't audit schools on a regular schedule – only when someone brings a problem to the agency's attention or when a school's own outside audit raises questions.

If public schools, in Texas or elsewhere, were operated in this openly crooked manner, the US Chamber of Commerce would have already ordered Margaret Spellings to shut them all down.

Here's a clip from a nice piece of reporting by Karen Smith of the Dallas Morning News:

. . . . These charters collected state funds either by inflating the number of students in their classrooms or by making accounting mistakes.

Charters often don't have experienced staff or strong oversight and, unlike traditional public schools, they cannot generate revenue through property tax hikes or bond elections, according to TEA officials.

"There is a kind of perverse incentive for a charter school in financial distress to look at [attendance inflation] as a way to get more money," said Dr. Dawn-Fisher, deputy associate commissioner for school finance. "If they can't get the warm bodies in the building, they may feel an incentive to falsify records."

TEA officials say they look for suspicious attendance figures at charters, but their regulatory system relies on self-reporting from the schools. TEA puts monitors at schools only after serious problems have been identified.

The current $26 million debt comes from 93 of the 211 charter operators in Texas. The amount equals the average state funding for about 4,800 students at roughly $5,400 per student.