Remembering Dr. King in the Era of the New Reverend Ikes of the Megachurches 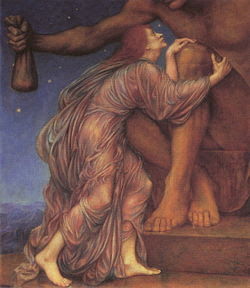 CNN has a story on the new black megachurches built from the "prosperity message." They have no time or place there for Dr. King's message of justice and sacrifice and courage and freedom and peaceful resistance and determination and hope:

. . . . Forty years after his death, King remains a prophet without honor in the institution that nurtured him, some black preachers and scholars say.

They also say King's "prophetic" model of ministry -- one that confronted political and economic institutions of power -- has been sidelined by the prosperity gospel.

Prosperity ministers preach that God rewards the faithful with wealth and spiritual power. Prosperity pastors such as Bishop T.D. Jakes have become the most popular preachers in the black church. They've also become brands. They've built megachurches and business empires with the prosperity message.

Black prophetic pastors rarely fill the pews like other pastors, though, because their message is so inflammatory, says Henry Wheeler, a church historian. Prophetic pastors like the Rev. Jeremiah Wright, the former pastor for Democratic presidential candidate Sen. Barack Obama, often enrage people because they proclaim God's judgment on nations, he says.

"It's dangerous to be prophetic," said Wheeler, who is also president of the Christian Theological Seminary in Indianapolis, Indiana.

"I don't know many prophetic preachers who are driving big cars and living very comfortably. You don't generally build huge churches by making folks uncomfortable on Sunday morning," he said.

The prosperity gospel started as a fringe doctrine in the black church. It was pioneered by "Rev. Ike," a prosperity televangelist with a pompadour who boasted during his heyday in the 1970s that "my garages runneth over."

Jonathan Walton, author of "Watch This! Televangelism and African American Religious Culture," says that although people may have chuckled at Ike's flamboyance, his theology exerts more influence in the modern black church than King's. . . .

Here is what Dr. King had to say a few days before he was assassinated on the subject of sacrificing truth and principle in order to worship Mammon:

. . . .One day a newsman came to me and said, "Dr. King, don’t you think you’re going to have to stop, now, opposing the war and move more in line with the administration’s policy? As I understand it, it has hurt the budget of your organization, and people who once respected you have lost respect for you. Don’t you feel that you’ve really got to change your position?" I looked at him and I had to say, "Sir, I’m sorry you don’t know me. I’m not a consensus leader. I do not determine what is right and wrong by looking at the budget of the Southern Christian Leadership Conference. I’ve not taken a sort of Gallup Poll of the majority opinion." Ultimately a genuine leader is not a searcher for consensus, but a molder of consensus.

There comes a time when one must take the position that is neither safe nor politic nor popular, but he must do it because conscience tells him it is right. I believe today that there is a need for all people of goodwill to come with a massive act of conscience and say in the words of the old Negro spiritual, "We ain’t goin’ study war no more." This is the challenge facing modern man.

Let me close by saying that we have difficult days ahead in the struggle for justice and peace, but I will not yield to a politic of despair. I’m going to maintain hope as we come to Washington in this campaign. The cards are stacked against us. This time we will really confront a Goliath. God grant that we will be that David of truth set out against the Goliath of injustice, the Goliath of neglect, the Goliath of refusing to deal with the problems, and go on with the determination to make America the truly great America that it is called to be.

I say to you that our goal is freedom, and I believe we are going to get there because however much she strays away from it, the goal of America is freedom. Abused and scorned though we may be as a people, our destiny is tied up in the destiny of America.

For more than two centuries our forebearers labored here without wages. They made cotton king, and they built the homes of their masters in the midst of the most humiliating and oppressive conditions. And yet out of a bottomless vitality they continued to grow and develop. If the inexpressible cruelties of slavery couldn’t stop us, the opposition that we now face will surely fail.

We’re going to win our freedom because both the sacred heritage of our nation and the eternal will of the almighty God are embodied in our echoing demands. And so, however dark it is, however deep the angry feelings are, and however violent explosions are, I can still sing "We Shall Overcome."

We shall overcome because the arc of the moral universe is long, but it bends toward justice.

We shall overcome because Carlyle is right—"No lie can live forever."

We shall overcome because William Cullen Bryant is right—"Truth, crushed to earth, will rise again."

We shall overcome because James Russell Lowell is right—as we were singing earlier today,

Truth forever on the scaffold,

Wrong forever on the throne.

Yet that scaffold sways the future.

And behind the dim unknown stands God,

Within the shadow keeping watch above his own.

Thank God for John, who centuries ago out on a lonely, obscure island called Patmos caught vision of a new Jerusalem descending out of heaven from God, who heard a voice saying, "Behold, I make all things new; former things are passed away."

God grant that we will be participants in this newness and this magnificent development. If we will but do it, we will bring about a new day of justice and brotherhood and peace. And that day the morning stars will sing together and the sons of God will shout for joy. God bless you.