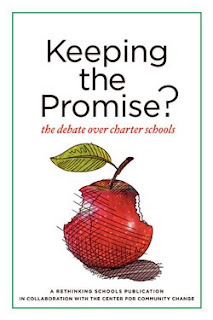 Good reading below from the Center for Community Change blog. Bolding is that of the author:

This essay, about community values in education, echoes themes in her new book "Keeping the Promise? The Debate over Charter Schools " which you can purchase here.

This fall, the Center for Community Change and a wide range of community organizing groups across the country are launching a two-year “Campaign for Community Values.” With it, we want to change how we as a nation respond to increasing poverty, inequality and injustice brought on by decades of policies that divide, rather than unite us.

The prevailing emphasis on individualistic solutions to collective challenges is nowhere more evident than in our public schools. All of us are dismayed and angry about the state of public education in our poorest communities. But the response of policy-makers and conservative advocates has too often been to offer individual families a way out, rather than to acknowledge that we must solve this problem collectively. The experiences of all children in the nation’s public schools (and on our streets) are intertwined. When we are satisfied because some schools are doing well, or when we offer individual students the “choice” to attend high-performing schools, we pull up the ladder of opportunity and deny success to millions of others. We must demand a collective re-commitment to public education. We must do it together. And we must do it soon.

Listening to the public debate, one might come to believe that all of our nation’s public schools are failing; that an institution once considered inviolable, has past its useful life expectancy and should be dismantled. Even we, as organizers, sometimes adopt this fatalistic frame,

Not so fast. In fact, thousands of public schools and school districts in this nation provide children with superior teachers, academic texts and materials, fully equipped science and technology labs and a challenging and diverse curriculum. We know what a high quality public education looks like. We provide it to millions of kids by insuring that the resources of the wealthy are channeled back to their local communities in support for their public schools and their children.

But we turn our backs on other children and families. In communities where we organize – where jobs and affordable housing are in short supply, where basic health care is scarce and local property tax revenues (which fund our schools) are strained – in these communities we accept shortages. We get used to seeing dilapidated school buildings inexperienced teachers, antiquated textbooks (or no textbooks!), a lack of computers. We get used to the presence of police officers and metal detectors to quell the disaffection of students who endure the disrespect we convey by allowing their schools to crumble. We absorb a deficit model that blames poor children and poor parenting for the problem. And then we offer – through local, state and federal policy – escape hatches for the few, rather than a fair shake for everyone.

The failure of public schools in some communities is not the fault of the children and families that attend those schools. Nor it is a failure of the institution of public education. It is the result of a willingness to look the other way, and the pursuit of an “American Dream” that values individual effort over public purpose and collective fate.

This isn’t just rhetoric. Our educational policies over the past several decades have reinforced the message that there’s a limited amount of “success” to go around, and that individual parents and students should grab for it, then pull up the ladder behind them.

No Child Left Behind

Despite the lofty title of the most recent version of the Elementary and Secondary Education Act, No Child Left Behind (NCLB) does precisely what it claims not to do. Much of NCLB is based on principles of individual action and responsibility, rather than collective interests:

Rather than ensuring that all our public schools have the best we can offer, No Child Left Behind gives up on failing schools – withdrawing money, imposing sanctions and eventually closing them down. Many see NCLB as an insidious strategy to dismantle public education in our poorest communities, in favor of the eventual transfer of public dollars to private entities to run our schools. Affluent suburban parents would never condone such policies.

One of the most prominent expressions of the “go it alone” mentality is found in privatized, free-market solutions to public challenges. Jan Resseger, with the United Church of Christ Justice and Witness Ministries refers to a central myth of American culture – the myth of the “American Dream.”

In New Orleans after Hurricane Katrina, free-market cheerleaders called the ravaged city a “green field” for experimenting with privatized public education. The city’s school system, rather than being rebuilt in the model of the best public school systems in the nation, was dismantled and out-sourced to private entrepreneurs looking to make a buck the expense of some of the neediest children the nation has ever embraced.

This strategy is at work in Ohio, the District of Columbia and other places, where public education in our poorest districts is being called beyond repair. But instead of presenting solutions that lift all boats – that restore community values in public education – those who promote privatization are comfortable with structures that serve only some children (and themselves) well. They are content to allow those who fail to “choose” a supposedly better option, languish, not with the miserable resources that our nation has set aside for them, but with less than that; because those who leave out of supposed self interest take public resources with them when they go.

The right-wing dismantling of low-income, mostly African American public school systems like New Orleans and the District of Columbia is based on the promise that individual choice produces collective improvement. It is a lie. As Resseger acknowledges, “there is no evidence that choices based on self interest will protect the vulnerable or provide the safeguards and services needed by the whole population.”[v]

The American public still strongly supports our historic tradition of public education. There is wide and deep support for public schools as a place – perhaps the place – where children and adults engage as one community, learn from each other and rise collectively.

There are many components to an education system that is truly structured for the common good:

In our campaign for Community Values, we must demand that public schools be fully supported by our collective resources. It is time to stop asking some communities to get by with less than the full riches our nation can offer. We must demand policies that connect us together, and an end to structures that isolate and separate.

Leigh Dingerson is the Education team leader of the Center for Community Change.