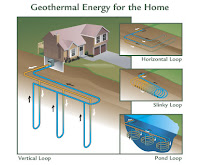 When students walk through the doors of Hardin Valley Academy in August, the air circulating through the building will have been cooled by the earth.

While using geothermal heat pumps at Hardin Valley is a first for Knox County Schools, there are nearly 500 schools across the country using them, according to the U.S. Department of Energy.

Environmentally friendly geothermal systems cost more up front than conventional heating and air-conditioning systems, but the savings in utility bills and maintenance costs will make up for the difference within five years, according to project manager Jeff Galyon of the Public Building Authority.

"Basically, your cooling is free," Galyon said. "You've got a constant moderate temperature to heat and cool with, which is very, very efficient."

The system pumps water through 286 pipes sunk 300 feet deep beneath the parking lot, where the temperature of the earth is a constant 55 degrees. The water circulates back through heat pumps in each room in the 211,260-square-foot building.

"It's more expensive up front, but it will be worth it in the long run," said school board member Thomas Deakins, who represents the Northwest Knox County community where the school is being built. "It's a wise decision because utility rates will be increasing."

According to an engineering analysis performed for the PBA, installation costs are pegged at $3.24 million, compared to $2.61 million for the least-expensive conventional option. But energy consumption is less by far - $176,191 in the first year, as opposed to a range of $231,750 to $255,884 for conventional systems.

Galyon estimates that the increased installation costs will be offset within five years. Gil Melear-Hough, of the Southern Alliance for Clean Energy, said the system could pay for itself even faster.

"Especially with a new building, you can quickly get your payback," Melear-Hough said. "A geothermal (system) will save them hundreds of thousands, if not millions, of dollars."

Plus, he added, there's a positive environmental impact.

"You're reducing emissions because you need less power," Melear-Hough said. "Every kilowatt you don't need, that TVA doesn't need to burn coal or generate nuclear power for, the better it is for everybody. It's clearly one of the technologies we need to embrace more and more."

PBA is looking to do just that. Galyon said the agency is conducting tests at the downtown site of Knoxville's new transit center, which would require 68 wells for pipes should geothermal prove feasible.

"If the tests come back positive," Galyon said, "we'll move forward with it."

Want to use this article? Click here for options!